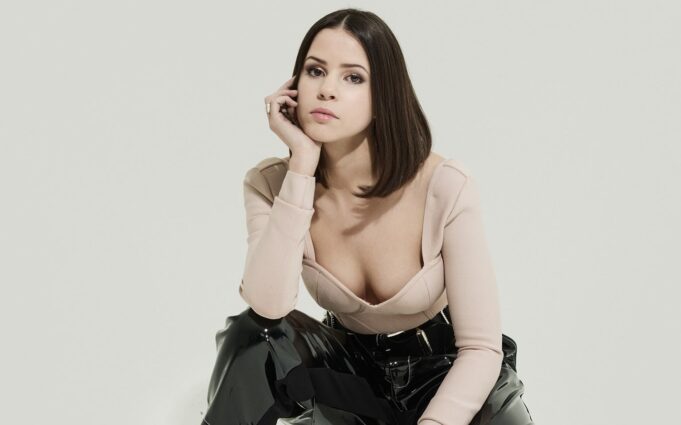 From touring with the likes of Lindsey Stirling and Thirty Seconds to Mars, Marina’s talent hasn’t gone unnoticed…I mean Sia even wrote ‘Freeze You Out‘ for her, so if that doesn’t make you love her more, what will?

Back with her new track ‘Double Life’, I chatted to Marina about new music, songwriting and touring.

I wrote ‘Double Life’ with David Stewart, Jessica Agombar and Eyelar Mirzazadeh. We thought it was a great idea to write about how all of us are wearing different masks during the day and how much we have to pretend to blend in. We all feel like we’re living a Double Life at some point in our lives.

What’s your songwriting process like? Do you think it’s a good way to deal with what’s going on emotionally in your head?

I don’t like the word “process” when it comes to my songwriting. It’s more “artsy” than that. I usually write down everything that goes through my mind during the day in my notes and once I feel like I have enough material to write some songs, I set up writing sessions. We need good chemistry in a writing session. It’s all about who you’re writing with and the energy in the room. I don’t know if it’s a good way to deal with what’s going on in my head but I know it’s the easiest way for me to let everything out. Clearly this can include lots of emotions as you dig into the story, which is why I always make a point of recording my vocals on the same day in order to capture those emotions in the recording.

What makes you most excited and/or scared when releasing new music?

I’m excited to read and hear my fan’s reactions and to reach new people with my music. What scares me the most is to disappoint the fans.

I think I just realised it over the years as I was working in the music industry. I never woke up one morning and “knew” that I wanted to be a singer. It just happened.

You’ve supported some amazing people on tour and have also played over one hundred live headline shows. What has been your most memorable on-stage moment?

I think my most memorable on-stage moment was my first Olympia in Paris. It’s such a prestigious venue and I just couldn’t believe that I was able to do this at only 18 years old.

How do you usually prepare for a show? Do you have any pre-show rituals?

I just sleep a lot, drink ten bottles of water a day, eat as well as I can and sing as much as I can. I don’t really have any pre-show rituals.

What advice would you give to your younger self?

The same I would give myself today: learn to let go and trust the process.

What are your plans for the rest of the year? Can we expect any new music?

Yes, you can expect new music from me by the end of the year! Things are gonna start moving very soon so stay tuned.