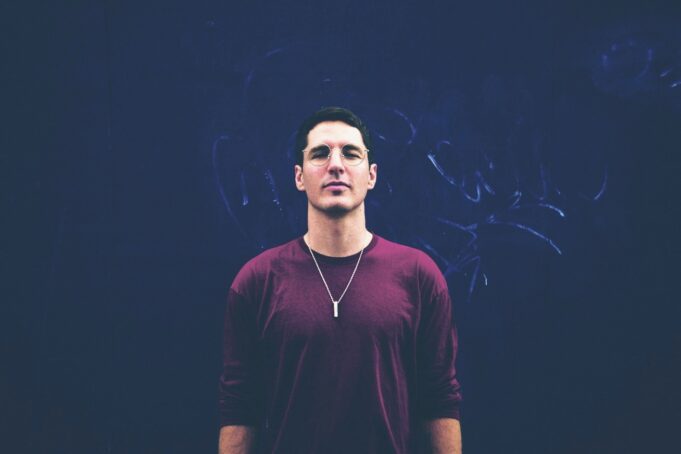 Back with his second sultry alt-pop single ‘Blame’, Felid is definitely one to watch.

Perfected with his exquisite self-production, the track mixes future bass intimacies with synthetic thuds and infectious sultry melodies. Created during a late-night hotel shift, ‘Blame’ is an intricate tapestry of alluring alt-pop.

We chatted to Felid about his new single, music in 2020 and songwriting process.

How are you doing? How have you stayed creative during the pandemic?

Things are obviously a little crazy but I’m actually good, thanks. 2020’s been a curveball in so many ways but I really can’t complain. The extra time in the studio has meant I could get going on a load more music and really get into the details of what direction I’m headed in creatively.

What inspired you to create ‘Blame’?

Haha. I think based on the timing and lyrics of the release, and the recent changes I’ve been through musically, people have made their own assumptions on it. But it’s actually about a load of different times that I’ve seen in my life and the lives of friends and family that one person has tried to control the way someone else deals with a breakup or split of any kind. Does that make sense? If you caused that person’s problem in the first place, you can’t really choose how they deal with it. Usually, I create the music first and then build the lyrics and melody around what that makes me feel and in this case it was definitely defiance, maybe with a hint of rebellion, that led what it would be about.

‘Alt-pop’ is probably the most appropriate ‘label’. It’s usually quite synth-led with strong percussion and rhythmic elements, but I’ve got some stuff in the pipeline that mixes in orchestral and film score-esque elements to all that, so I don’t want to label it too much.

Do you do anything to get into the ‘zone’ when writing? Do you think songwriting is a good way to deal with what’s going on in your head emotionally?

I don’t know that there is a ‘secret’ to writing a great track. Some people write 5 songs every day for years and then only release the ones they think will do the best. Other people wait months for that perfect mix of inspiration to hit and then write a great track in 10 minutes that goes on to the chart. For me it’s kind of a mixture of the two, I’m always writing and practising and trying to get better where I can, but there are magical moments where it’s more a flow of consciousness than anything else and I can’t deny that these always bring about the songs I’m most proud of.

And hell yeah. I sometimes feel like I’m cheating at life a little because I get to put things into songs that some people might pay a psychiatrist or doc to listen to. It’s become more and more obvious to me that honesty and openness are so important in music (and most of the art), and to connect with like-minded people. So when I’m feeling something, I can put it in a song and find out that there are a thousand other people feeling the same thing. That’s pretty powerful.

wow, I have so many. I’ve already had the chance to work with people I listened to growing up and it was incredible, but I think getting into a room with Justin Vernon (Bon Iver) and Sonny Moore (Skrillex) has the potential to create this beautiful f’d up amalgamation of spine-tingling magic. To be a part of that would be incredible.

How would you like your songwriting to develop? Do you have a direction in mind?

This is always a difficult idea because I want people to be jumping around and going crazy and my shows, but I also want to create stuff that they can sit and listen to in headphones in their bedrooms and think about whatever they’re going through. So I think my aspiration will always be to try and build something in between those two – music that has confidence and vulnerability at the same time. This next year I think I’m going to be exploring this quite a lot, but I’ll also always have the self-imposed limits of what I enjoy making and listening to.

Is there one artist or band, you’d love to support on tour in the future?

I’ve been to a few Bonobo shows on his different tours and they always feel so exciting. I think that would give scope to develop my live show a little more too, rather than limiting it to strictly ‘electronic’ instrumentation. He’s always had this amazing mix of sampling, synthesis and live instruments (alongside obviously beautifully curated vocal features).

Hahaha! I did freerunning (or ‘parkour’) for many years and have been thinking recently of getting back into it. Although I think that scene in The Office kind of ruined it for everyone…

What is the theme tune to your life?

What’s next for you? Can we expect more music?

Yes, I have a load of songs that I’m really looking forward to getting out, including another one on the 13th of November. This year is gonna be hella exciting…