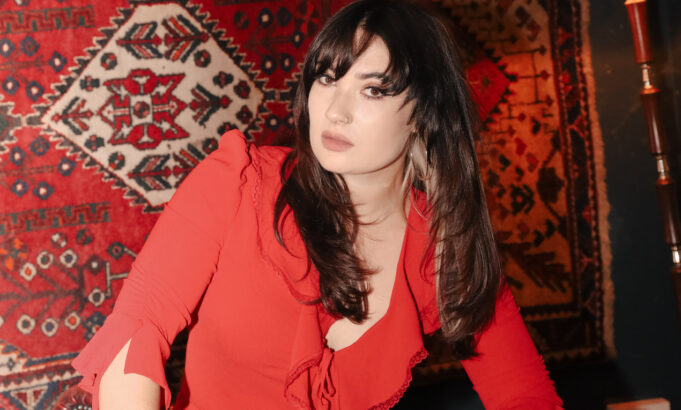 Raised in Soho, then a wilder mix of the seedy and the bohemian rather than the post-gentrified blandness we see today. Her family ran a pizzeria favoured by those in the know: the actors, gangsters, drag queens and sex workers who gave the area its own unique identity..

Her early demos resulted in her working with established writers and producers when she was just 15-years-old. She established herself as an in-demand songwriter before she forged her signature style during sessions with Biff Stannard (Ellie Goulding, Kylie, Spice Girls). Oz is like that best friend who makes nights out a riotous blur of chaos and carnage, but also one who can make everything right the following morning.

Tell us about your debut EP ‘Jupiter’? Is there one track you hope will be a fan favourite?
I love them all like children! It’s so hard to choose but I think Foot Down will hopefully be a fan fave just because it sums up my journey so far I think.
We really love your single ‘Foot Down’, what was your inspiration for the track?
It’s all about going for what you want and not letting anyone stand in your way when it comes to your dreams and desires.
How do you know when a track is ready to send off into the world?
I don’t think as an artist you ever truly feel a song is entirely finished and ready. I think there’s always something in your head that says “oh tweak that and fix this” but at some point, you just have to bite the bullet and take the leap. Otherwise, you’ll just be tinkering with a track forever.
What’s your songwriting process like? Do you do anything to get into the ‘zone’?
I normally come into a writing day with a lyric idea. Sometimes it’s fully formed sometimes it’s just random thoughts written down. So we usually start there. Oh, also lots of tea and many a biscuit is consumed during my writing process. Not very rock and roll I know but It does the job.
Do you thinking growing up in Soho had an impact on the music you create today?
I think growing up somewhere where you are surrounded by people from entirely different walks of life can only ever be a positive thing. So I think it maybe gave me a unique perspective on human nature that I’ve carried through to my music.
What’s your earliest music-related memory?
I think I was probably about 6 and I was singing Down in a Hole by Alice in Chains in my garden and my neighbour popped his head over the wall and joined in. It was the first time I thought, hey maybe I’m not bad at this singing stuff.
How do you feel about the representation and portrayal of female musicians? Is there anything you’d like to change?
I think it’s not up to me to say I’d change anything. I think as long as the female artist in question is confident in their career and image and in control then go for it do what you want if it makes you feel empowered. That’s the goal right ?! I’d maybe like to see some more realistic pop stars. Maybe a singer that’s a  size 12-14 ! that would be good , that’s about it.
What advice would you give young women that want a career like yours?
It’s stressful. You get rejected. You get knocked back constantly. So believe in yourself. You need that, otherwise, you’ll quit because you don’t think you’re good enough. So be prepared to keep banging on doors, work hard, surround yourself with good people and believe you can get there.
What would be the theme tune to your life and why?
Changes by David Bowie. My life changes every second so I guess that’s the only one that would fit hah
What’s next for you?
Hopefully once COVID has finished ruining the world we will still have some live venues left to play in. I’d love to be able to tour and play my songs to an audience. Oh and more music to come!