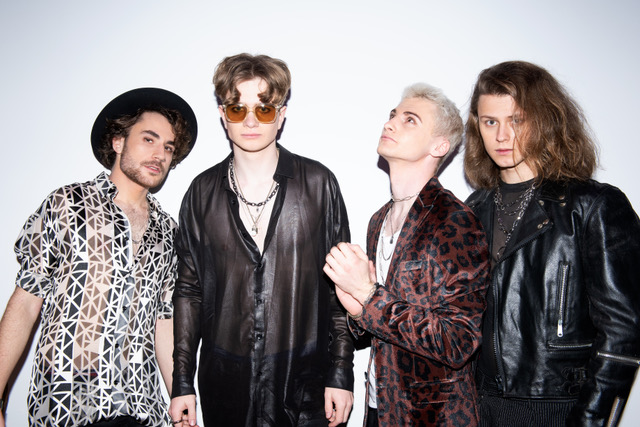 Consisting of members Billy LeRiff, bassist Jonny Faires, guitarist Marc De Luca and drummer Ian Wilson, Two Weeks In Nashville came together through their love of the sounds, energy and extravagance of history’s greatest rock bands. We chatted to the band about their new single and how they’re coping in lockdown.

We heard you’re all isolating together. How’s that going? Are you finding it easy to be productive during the lockdown?
Obviously lockdown has been a change of lifestyle to everyone. Us and every musician out there have had live shows and tours cancelled, however people have had it much worse around the world. After the initial worry when it began we’ve just tried to continue working and power though from home because we’re lucky enough to be living together! We actually filmed the music video for our last single, which raised money for NHS Charities Together and American Red Cross because of all the mixed messages that have been going around, and the new video for ‘The Truth Is Just Counterfeit‘ at home together under lockdown.

Tell us about your new single ‘The Truth Is Just Counterfeit’.

‘The Truth Is Just Counterfeit’ was written to point a finger at all the takers out there amidst a climate of fake personas. How do you know who to trust?

What track from your debut album do you hope will be a fan favourite? What do you want fans to take away from your music?

To be honest, we’d love everyone to have a different favourite, that’d be the dream! We just want to entertain as many people we can and hopefully offer people a sense of release from all the negativity around at the moment. All about positivity with us!

Two Weeks In Nashville seems like it would garner some attention. Is there an interesting story behind the name? Was it hard to agree on?

No actually, for once we all couldn’t disagree on something! We were lucky enough to go to Nashville at the end of 2018 and we absolutely fell in love with what is literally called “Music City”! The people were so positive, music everywhere you went and we really found our sound whilst we were there. If you haven’t been before, we can’t recommend it enough. Oh and we went for two weeks of course as well!
Describe your sound in three words
Rock ‘n’ Roll.

You’ve previously played at London’s Camden Assembly. What would be your dream venue to perform at?

Dream venue would have to be Glastonbury Main Stage. We’ve heard nothing but good things about it; seems like a cracking venue for a TWIN show!

Who has the worst habits whilst touring?

Do you do anything to get pumped before heading to the stage? Any strange rituals?

We usually give our manager Brian Harris the Birthday bumps (…regardless of whether it’s his Birthday or not) before heading on just to get the buzz going. Another ritual would have to be waking up Eeyore because he’s always asleep recharging ready for the show! Ian loves a nap hence his nickname. He can sleep anywhere… and we mean literally anywhere!

That’s a tough one. If it were one of our records it’d be Take Control, but from someone else, it’d have to be ‘A Day In The Life’ by The Beatles. Just so many unexpected turns and we never know what’s going on today, let alone tomorrow!

Once lockdown is all over, Is there one band or artist that you’d love to collaborate or tour with in the future?

Yes, we were actually due to be going on our first support tour in Europe with a great band called ‘Bang Bang Romeo’, but that was cancelled due to lockdown! So we would definitely love to something with them after lockdown!

Lastly, what’s the first thing you’ll do once the lockdown is lifted?