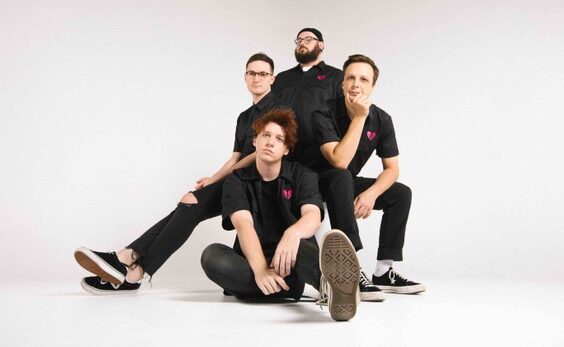 Having only formed last January, Waxflower has already cut their teeth on the live scene in and around Australia. I chatted to frontman/bassist Tristan Higginson.

How did you all first meet?

We had all been in bands in the Scene and orbited around each other for years. We had all proven passionate about the initial demos and decided there was something here to pursue.

Tell us about your single ‘Sixteen Floors’. What was the inspiration behind it?

It focuses on a period of my life after a breakup. I tend to write metaphorically usually, but this one more straight down the middle catharsis

What’s your recording process like? Do you do anything to prepare?

We demo extensively before we take anything into the studio. We prepare full-band demos that likely have multiple versions, then we take stock of what we have in the bank before we head to the studio.

Who do you feel has influenced the music you create?

Why ‘Waxflower? Who came up with the name? Was it difficult to agree on?

I picked the name out of nowhere and liked it so much that I self-recorded an acoustic track and uploaded it to Spotify as a flag in the dirt. That song, thankfully, is lost to time.

You’ve only been a band for a short time but who has the worst habits?

We all have pretty bad snoring problems.

How have you been staying busy during lockdown? Have you found it hard to be creative?

We’ve been going all-in on writing and supporting the release of Sixteen Floors.

Who would you love to support on tour and why?

I would love to support Jimmy Eat World as they have been the greatest influence on my songwriting. I feel like that would be an extremely valuable learning experience.

What is the theme song to your life?