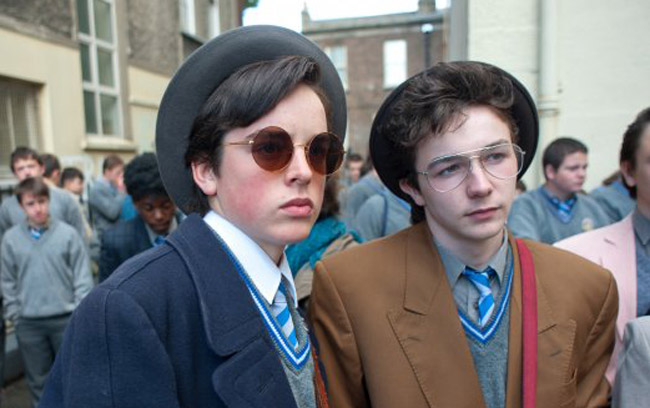 Director John Carney has brought us musical wonders for the big screen in the form of Once and Begin Again and his new offering Sing Street – which is out in cinemas May 20 – is another musical journey that will penetrate the soul and make you fall in love with the 80’s.

Set in 80’s Ireland, Sing Street follows Conor, a boy who wants to be noticed by a pretty young girl he sets his sights on by starting his own band, offering her a place in their music videos. Laden with a young cast with hardly any acting experience behind them they are set to charm audiences across the world.

We sat down with lead actor Ferdia Walsh-Peelo who plays Conor aka Cosmo about first time acting, his musical background and working on the feel-good film of the summer, Sing Street. You play Cosmo/Conor in Sing Street tell us about your experience with the open casting.

I went to an open casting in Dublin which I heard about through a friend. I thought why not and just try it out. I did a lot of those kinds of things. I went to a lot of auditions as I had been a boy soprano in the music industry and doing stuff like that. So I was used to going in and trying out for things. This just sounded perfect for me. I queued for hours; I almost wasn’t going to queue when I saw the length of it. I nearly went home but Mum stopped me, I was going for like 5 hours, it was ages. It was actually good, I got talking to people in the queue it was grand. Obviously, the audition went great.

I never pursued acting before so this was the first thing; it was the whole connection to music as well. I was always so driven by music, always playing music. I didn’t really have time to think about anything else. I just wanted to play music. I was always into performing and I had had that experience with opera, being on stage so I was used to that kind of acting thing.

You come from a musical background consisting of opera and Irish Folk music, was it a challenge playing 80’s pop music?

I did opera and then I branched out into other things at the same time. By the time my voice started changing I went for other things. I had no experience with 80’s music before that was a whole new experience – an interesting one. It was great, had to learn all about it, and had a crash course in 80’s music. It was just looking at a load of music videos John (John Carney the director) had sent. He sent loads as they had everything; they had the fashion, the sound, the style. It was different. I don’t know how I missed it. It seems to be everywhere. You did a cover of Duran Duran’s Rio but were told you were too good and were told to mess it up? How did you manage that?

That was really fun; they were my favourite times when we had to play. I had actually forgotten about Rio that was really fun. We went to the studio, they actually made me record it twice. I recorded it kinda bad and then they were like No, No. Like halfway through the shoot, they said they want it worse again. I just had to go in and sing as out of tune as I could. They actually had to train me to do that. I had to learn how to cut out my vibrato which is like the shaky type of thing that I just naturally do from being classical trained. It has proven really useful to me but it was really funny.

Had you even heard of Duran Duran or any of the 80’s musical idols Cosmo and the band mimicked before the film?

No, and as I said I don’t know how I missed them. I think I was just had my eye on other music. I was also just 14. So I was just discovering all kinds of music and I hadn’t quite got to the 80’s yet. I think I would have. My favourite that I discovered would have to be Hall and Oates – they are extremely talented musicians. I think that when you look at their 80’s stuff they went really pop but even before that when they were doing one of my favourite videos is the Old Grey Whistle Test and them in 1979. It was a live version of the song She’s Gone and it’s just phenomenal. It’s just so, so good musically, it’s just flawless. I think when you do go pop you go a bit shouty. Daryl’s vocals were just a bit of the ball but they are just brilliant musicians. They just have the best pop tunes.

Most of the young cast had little acting experience; did you find the whole experience a little daunting?

I didn’t find it daunting. For me when I was that point in my life I was just there to have fun. The thing was that’s what that set was like, Sing Street was like that because John has this thing about him that just makes you feel immediately really comfortable on set. He gathers people around him that are really passionate about the movie and really enjoy the whole process. That created a really nice fun atmosphere on set. There were loads of young people around, Jack and Maria and the girl who plays my sister, Kelly are all just really fun. I just had a great time, I didn’t feel any pressure it was just fun. Who on set was the best person to work with?

Jack (Reynor) is amazing; We did lots of scenes together just in the room one on one which was great. I learnt so much from those, everything I learnt was from those acting wise. Jack took me under his wing a bit and helped me out which was really nice. We just got into the characters together and discussed it and worked it out in the trailer beforehand, it was great. Everybody on set, I mean even the other young guys were just really inspiring. I learnt so much from all of them.

Sing Street is out in cinemas May 20.