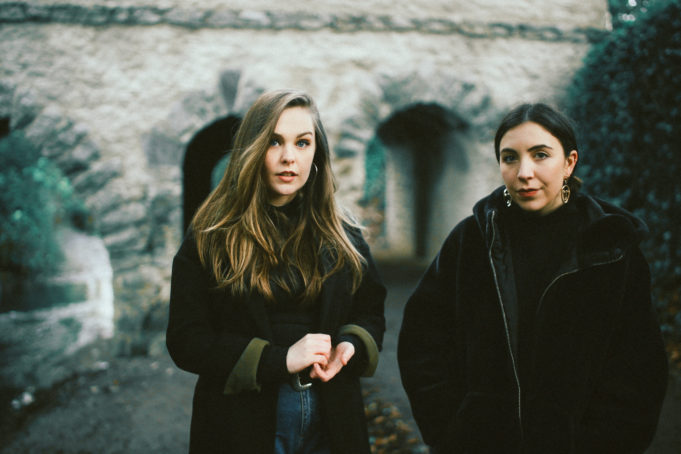 Meet Saint Sister, a duo from the North of Ireland formed in 2014 have been taking the industry by storm.

I chatted to Morgan Macintyre and Gemma Doherty about their first single from their forthcoming record.

Hey girls, how are you today?

G: We’re good, thank you! We’ve been getting album masters back this week, so getting stuck into that today. We’ve been sitting on these songs for such a long time; it’s so nice to finally be able to put them to bed and start making space for new ideas.

How did ‘Saint Sister’ come about?

M: I was playing shows under my own name while I was in college but I never quite felt like I was making the music I wanted to make. I was enjoying it and I was very lucky to have help from some really talented and close friends but I think I quickly realised I needed a partner. Meeting Gemma when I did, just as we were both finishing up college was a stroke of luck. We were both in the same headspace at the same time; knowing we wanted to make music all day, every day but not sure what form that might take. I asked her for coffee one day, thinking we might get on but not knowing that we’d end up spending all of our time together and now we’re here!

We really want to know why Saint Sister? Is there a meaning behind the name?

G: When we first started out we called ourselves ‘O Sister’. We decided to change the name early on as we met another artist online from London with the same name, whose stuff is really lovely. After a seriously long list of terrible names, Saint Sister was thrown into the mix. We’re not actually sisters, but we each have a sister, and liked the idea of representing the sisterhood in some way. The ‘saint’ seemed to prop it up and give weight to how powerful that bond can be.

Tell me about your new single ‘Twin Peaks’

M: At it’s core, it’s a letter to a friend who was going through a difficult time. It’s full of loads of references of things that I thought might cheer my friend up, or at least distract them for a little while. I was hoping that by throwing all these things we like doing together (listening to Joni Mitchell and Judee Sill or watching Twin Peaks) in front of the problem I might buy us some time to really figure everything out. It’s a blissful song, full of good intentions but underneath it all there’s a lot of desperation, a lot of scrambling for the answer, a lot of sweeping things under the carpet.

You guys have a forthcoming record called ‘Shape of Silence’ coming later this year, what was your inspiration behind it?

M: As it’s our first album, we wanted the songs to reflect the sum of our experience up to this point. It was only after we settled on the track listing and running order that I could see see the through-theme we were developing over the last few years. The beginning of the record is much lighter in tone than the end. It’s a person on the right side of a new relationship, just on the edge, testing boundaries, figuring out what it’s okay to say or what should be left implied, getting to know not only themselves but a whole other person. It’s conspiratorial and feels very much like us against the world. But then the songs become a little darker, a little more self aware and discerning and a little lonelier. The title comes from a line in our song Tin Man. It made sense to us for a number of reasons; namely we were interested in what could be felt when nothing is said, the power of silence, the weight of it, how heavy it can feel. G: We’re in the middle of an exciting collaboration at the minute which we can’t wait to announce. It’s with one of our favourite artists so definitely on the dream list.

What makes ‘Saint Sister’ stand out from other bands in the Irish music scene at the moment?

G: I don’t know if we’re particularly standing out, but I do know that the Irish music scene, in general, is buzzing at the minute. There are so many great acts coming out north and south of the border, and there’s a real diversity to it.

We know performances sometimes don’t go as planned, what’s been your most embarrassing on-stage moment?

M: Playing live is always a bit scary even when it’s going well, there’s always a sense of impending doom. I’m always worried that I’ll forget a word, fall over, mess up and everything is felt that bit more because whatever you do, it’s in front of a crowd of strangers. We’ve done all the usual embarrassing things but nothing that hasn’t been done many times before us. Playing live is one of our favourite things and as we’re doing it more, we’re getting more and more relaxed on stage and better able to cope when things go wrong or take an unexpected twist. I’ve started to enjoy those moments that used to terrify me.

Describe each other in three words

M: Hmm, we’re both always about 10 minutes late to everything.

You guys are doing a lot of touring this year, What can we expect from your shows?

G: We’re heading to a lot of places for the first time. It will be our first proper tour of the US and Canada, and the first time in Australia. The shows further afield will more than likely be slightly more stripped-back with our two-piece set up. We try to put as much energy and thought in the two-piece arrangements as we can, although it does have an intimacy to it. For the shows closer to home and places we are returning to, we’ll be able to bring the full band. We’re putting a lot of energy into both sets this summer, it’s nice to be able to switch between both.