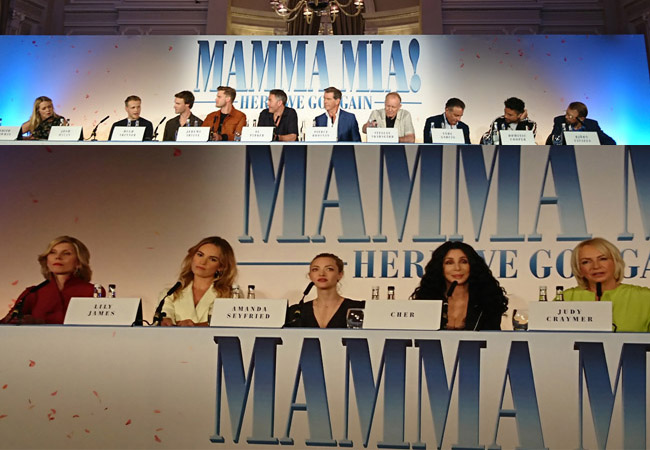 After 10 long years of waiting, Mamma Mia sequel, Mamma Mia: Here We Go Again finally lands on July the 20th. The movie, which features a whole host of foot tapping, sing-a-long tunes from Abba’s back catalogue (and some new material created by the groups Benny and Bjorn), sees a return for most of the original films cast and a few new faces. The film delves into the early life of Donna and how she ended up on the Greek Island, pregnant and alone, it yoyos back and forth between the past and present.

Following very much in its predecessors, shoes the film brings with it a whole host of singing, dancing, laughs and emotional moments and a gigantic cast. Amanda Seyfried who plays Sophie and Dominic Cooper who plays her husband Sky return along with her three Fathers Harry (Colin Firth), Sam (Pierce Brosnan) and Bill (Stellen Skarsgard). Also returning are Christine Baranski and Julie Walters as Donna’s best friends Tanya and Rosie.

We were lucky enough to attend the film’s Press Conference in London’s Corinthia Hotel moderated by Edith Bowman. Split into two press conferences to accommodate such a large cast, the first was made up of the lovely ladies of the film Amanda Seyfried, Lily James, Christine Baranski, Jessica Keenan Wynn, Alexa Davies and Cher. Executive producer and one member of Abba, Benny Andersson was also in attendance alongside writer Judy Craymer.

Abba writer and band member Benny Andersson gave a little insight into how the lyrics of each song helped to create the actual script of the movie.

“In order to create the script there had to be a number of songs put together and we couldn’t really use the 22 songs from the first film. Maybe two or three which we have, Dancing Queen is in, Mamma Mia is in. Having the songs is important as otherwise there is nothing to write the story around because the lyrics in the songs are moving the story forward”

Co-writer, Judy Craymer added to this; “Like with the opening song ‘When I Kissed a Teacher’ Ol and I went to Sweden to meet with Benny and Bjo. in that moment in the script, Benny said what about When I Kissed a Teacher. It worked brilliantly with the lyrics, the point of the movie and the stage show and the last movie is to reinvent their songs, kind of recreate them.”

With such a large cast, bonding and support were important for the whole experience. Along with Amanda Seyfried and Lily James partying both ladies went on to describe their time on set and how it felt like home.

Lily talking about performing Abba numbers with Alexa and Jessica said “We become like this girl band. The power of that and the strength and the joy was just amazing. All of us were supporting each other, weren’t we? It was a really beautiful energy there.”

Amanda went on to say; “You guys had really started shooting, you set the tone for the entire shoot by doing the bulk of your stuff before we even came, descended on Croatia. When we got there you guys were all warm and cosy and you made us feel all warm and cosy. It’s still daunting, as nice as it is to come home in a way.”

As a returning cast member, Christine Baranski admitted she didn’t even need to see the script to agree to do the sequel.

“I agreed to do the sequel without even seeing the script. My first question was were the same people on board, is everybody going to agree? Word was people were going to move heaven and earth to arrange their schedule, their complicated careers to do it. When I read the script, I was so taken with how really original it was to take this original story and do a sequel where you see the maturation of these characters that we’ve come to know, that they’ve been informed by loss, that big things have happened on their life. Seeing them come together in a new emotional depth and then the brilliance of taking it back in time with six drop dead talented, sexy young performers doing all of those sexy rock n roll songs so brilliantly.”

Considering Cher is a veteran to a set or two, she admitted she was terrified when she finally arrived on set but the whole cast was very welcoming.

“I was terrified, everyone had been together. Also, my character wasn’t very liked by anybody. I was really nervous but Ol [Parker] was great. Everybody was so nice to me but then Meryl was behind a piece of scenery watching me do my scene that made me feel good after the fact. It was hard to go on a set where you’re a stranger to everyone; I knew some of the people. I felt really kind of loved and kind of the great-grandmother.” The event got off to a riotous laugh when both Pierce Brosnan and Stellen Skarsgard were asked how it felt to return to the flared outfits.

Pierce made it clear that he felt humiliated “It was the same embarrassing, humiliation but I took it on my broad shoulders.” Stellen went on to describe that is wasn’t exactly comfortable for the male organs. “You have no idea how much spandex flattens your genitals.”

Pierce was quick to add how much the movie won his heart; “This is a movie for me that I will forever cherish in my heart. It was magical to do it 10 years ago. It was incredible to go around the world and see the joy it brought to people’s lives. To have that in your career is nothing but gratitude.” Andy Garcia is another new face to the sequel, although his role isn’t a major part it is still, in fact, integral to his relationship to Cher’s role as Ruby, Sophie’s grandmother.  He went on to gush how much it was a privilege to star opposite her after being asked what it was like to be serenaded by the iconic entertainer.

“Last night or in the movie? It was a great privilege really. We’re such huge fans of Cher, not only as a singer but an actress. When I got the opportunity to be a part of it I was very excited. Shortly after Cher picked me out of a bunch that was a blessing for me. A lot of people on this cast are old friends like Stellen and others that I have admired all my life so I am blessed to be here.”

Josh Dylan, who plays the young version of Stellen Skarsgard’s Bill added what it was like to play the character; “We didn’t want to do impressions. We established that quite early on because we couldn’t do it justice. We had a look at accent and stuff, a certain amount of freedom was good, it was helpful, I think, for all of us.”

The first film was such a massive hit amongst audiences and still is. Jeremy Irvine, who plays the younger version of Pierce Brosnan’s Sam gave his take on the appeal of the film.

“You take a move like this which, on paper, should be very broad. In this film [Ol] has given it such an emotional heart with a movie that appeals to so many people. You can’t underestimate the skill that, that takes. I’ve certainly seen that in his writing, directing, the first time we’ve worked together. When we first watched the movie there were people in the audience who laughed and also cried. I think that’s amazing when a movie likes this can actually make an audience feel that mood.” Dominic Cooper also returns as Sky, but that doesn’t mean he felt more at ease returning and singing. In Here We Come Again, Cooper performs an emotional duet with Amanda Seyfried but revealed it wasn’t all plane sailing when it came to recording the track.

“It wasn’t originally a duet but was so for the film. I loved the song already and then noticed very quickly actually how difficult it was to sing. What, I was made aware of, yet again, by how incredible this music is and how it has spanned more generations than anything. The fact that 5-year-olds know the lyrics and so do 65-year-olds. It’s a very emotive song when I was slightly struggling with it in the studio, it’s funny how your voice does different things at different moments. I was feeling quite emotional anyway but I just wasn’t managing it.

Being in the studio, you have a glass box, you’re in a very famous studio in London called Air Studios. It’s beautiful, you have the best orchestras, the best musicians, the best bands recording in. Then you have Abba watching you DESTROY pieces of art, you start sweating and panicking and being nauseous. The Benny came out and said “you’ve sung this perfectly before” and he got behind the piano. It was a joy and pleasure to be instructed by one of the creators of this piece of music and I constantly feel utterly honoured to be allowed to sing of the music.”

In the sequel, Mamma Mia! Here We Go Again, the story will jump back and forth in time to show how relationships forged in the past resonate in the present.

Mamma Mia: Here We Go Again is out in cinemas July 20th.