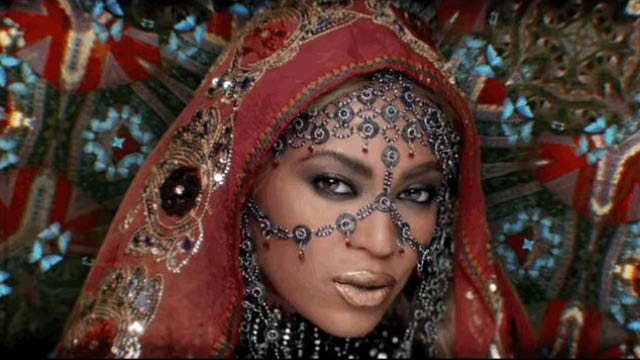 Beyoncé and Coldplay have become the latest high profile artists to be involved in a heated debate on cultural appropriation.

Both have been accused of idealising India as an exotic playground in the music video for Hymn For The Weekend.

The video features the British band performing at the Holi festival in Mumbai, while Beyoncé is depicted as an alluring Bollywood actress, wearing traditional Desi clothing and gesturing henna-painted hands in front of a psychedelic background.

While the video is an unquestionably beautiful example of cinematography, its imagery is untethered from its true spiritual and religious meaning. It portrays an idealised India and obscures the complexities of an often misrepresented nation.

The online community have widely condemned Beyoncé’s guise as an Indian woman. She’s not the first to be accused of cultural appropriation – Major Lazer, Iggy Azalea and MIA have all fallen foul of using Indian symbolism in their videos, while Selena Gomez and Kylie Jenner have been accused of reducing cultural heritage to a trend after wearing bindis.

In an increasingly globalised world where people of diverse backgrounds have intertwined, the line between appreciation and appropriation has blurred. Is cultural appropriation in the arts an attempt to profit from the practices of another culture, or is it an inevitable product of multiculturalism that we should learn to embrace? Multiculturalism has led to cultural homogeneity

In the 21st century, multiculturalism means we are no longer defined by national borders, skin colour or place of worship. Cultures coexist and as they do so, they begin to have a profound influence on each other.

India has been heavily influenced by Westernisation. It’s positive impact can be seen in the huge economic growth of India, however traditional Desi values and practices are being replaced with material desires, a phenomenon many blame on Western mass media.

Desi culture has also had a huge influence on the West, particularly its cuisine – there are now more Indian restaurants in London than there are in Mumbai and Delhi combined. Other elements of Desi culture, such as yoga practice and meditation, have become mainstream in Western culture.

Global industry and media are homogenising culture by popularising customs and diffusing diversity. Homogenisation is often used to describe Westernisation, but in this sense it is less about the spread of a single culture and more about the adoption of elements from numerous cultures.

However, while Western culture is largely materialistic, Eastern culture is predominantly spiritual. These conflicting perspectives are at the heart of a cultural identity crisis perhaps best portrayed in the arts.

Identity crisis in the art world

Migration and identity are recurring themes in the work of Indian multimedia artist Owais Husain. Born in Mumbai, Husain migrated to perhaps the largest multicultural melting pot of all – Dubai.

He is currently collaborating with students across the globe on his ongoing House of Cards project. Through the workshops, Husain encourages students to delve into subjects like displacement and immigration and asks them to express their own identity through photographs.

House of Cards was inspired from one of Husain’s early paintings “Nobody is where he wanted to be”. The painting reacted to the globalisation that transformed India in the late 1990s.

Husain has said: “We are all immigrants, driftwood in a ceaselessly dysfunctional world where a flux of identity in the nuclear and larger domains are elements of human nature. No human is untouched by the consequences of shifting populations and environments.”

Her work depicts the realities of growing up with dual cultural identity. She combines the iconic comic book style of Roy Lichtenstein and the melodramatic world of South Asian soap operas to deliver a satirical message of Desi-Canadian life.

Qamar says many girls of Desi origin are raised like Westerners, but are overshadowed by tradition, obligation and things they can’t relate to. She holds many Western beliefs that are taboo subjects in Asian culture and portrays this in her art. Her support for marriage equality was illustrated in “Uncle Pride”, an illustration that would be forbidden in Desi culture, but widely endorsed in Western culture.

Nonetheless, Qamar is affected by cultural appropriation and calls it out in her work. One particular piece, “Is this Gori wearing a bindi again?”, challenges the use of the bindi as a fashion statement by young girls who do not understand its true meaning.

In a BBC interview, Qamar said: “I refuse to do straight up cultural appropriation. I would never take the step of making Marilyn Monroe an Indian ‘auntie’ in my art.”

This is where Beyoncé and Coldplay have got it wrong in Hymn For The Weekend. Qamar uses both Desi and Western imagery in her art because both cultures form a huge part of her identity. For Beyoncé and Coldplay, of Afro-American and White English backgrounds, Desi culture forms little of their respective identities.

Instead of using its imagery in an ignorant, materialistic way, the music heavyweights would have been better advised to stay clear of using content that could offend the entire Desi population.