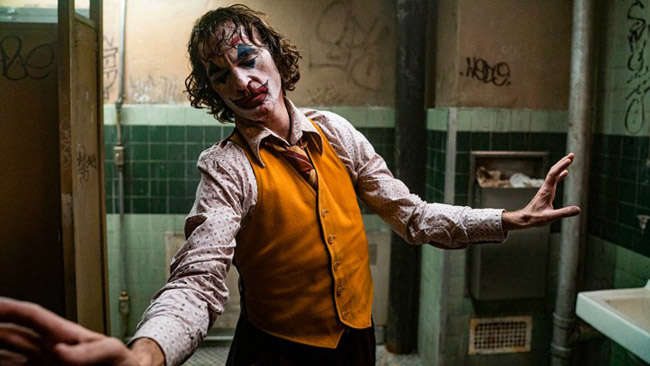 Phillips and Phoenix deliver a shattering and fresh new take on an age-old character, a character study of the birth of the supervillain with darkly disturbing vigour.

“Put on a Happy Face” is the war cry for the invisible, the ones suffering from depression and the lonely outcasts of society who are simply classed as that just for being a little bit different. Writer/director Todd Phillips unravels the mental state of Gotham’s Arthur Fleck/Joker with a deep-dive slow-burn character study of the birth of the supervillain with darkly disturbing vigour.

Failed party clown and failed stand-up comedian Arthur Fleck (Joaquin Phoenix) is a beaten and tortured soul, a character who is in dire need of a good meal and the acceptance Nah love of the people around him. Having had to deal with traumatic issues since childhood, engulfed in an unsympathetic system and living with his sick mother, Arthur leans on the numerous amounts of medication he has to take on a daily basis.

Knockback after knockback, Arthur is not only let down by his work colleagues and abandoned by the system but finds himself the city’s punching bag as a decaying Gotham divides itself between the rich and the poor. Suffering from a condition, Arthur can’t stop his uncontrollable laughter whilst his pain and suffering darken the souls of his eyes. Any nice gesture sees him slapped down with ignorant intolerance cutting away at the humanity that once filled his darkened heart. As his world descends even further into darkness, something snaps in Arthur’s brain as he emerges out of the other side of the mist, reinventing himself into the iconic figure we all know as Joker and the poster boy for Anarchy in Gotham.

Phillips Joker is certainly unique, an origin story that is a galaxy away from any other comic book film on the market today, and meticulous care has been taken to build a picture of the delicate mental stability of a man at breaking point without tugging on the heartstrings of sympathy.  We all know the Joker as a cold and callous criminal mastermind but we are opened up to what came before, his emotional state and even his moralistic values play a part in how his crime spree began to play out.

Whilst set away from the current DC Universe we are never far away from the mention of the Wayne name just to remind us all that this is where this character belongs. However, the timelines and the age of each of these characters just don’t add up to any current Batman storyline we are familiar with, making it a rather jarring and confusing bugbear in the plot.

Phoenix goes deeply method with intensity and is spectacularly superb, he not only owns the character of Arthur with every intricate movement of a deeply troubled man but he cuts a disturbing figure of pain. With the transformation into the green-haired, suavely dressed Joker, an urgent confidence engulfs his every fibre. He has made the character well and truly his own but there are moments of clarity, in his posture and pose where Heath Ledger’s Joker shines through a simmering veil.

Certain elements throughout are heavily influenced by Martin Scorsese, from visual content and, of course, The King of Comedy, in which Robert De Niro, in effect, reprises his role of Rupert Pupkin, and to be quite frank, Zazie Beetz character is so underwritten as a potential love-interest that it simply wasn’t needed

Die-hard fans of the DC universe might just be in for a deep dark shock from a film that at times is more art-house than comic book. Uncompromising and far less violent than you have been led to believe (there are certainly more extreme movies out there to influence those of a weak mind), Phillips and Phoenix deliver a shattering and fresh new take on an age-old character.