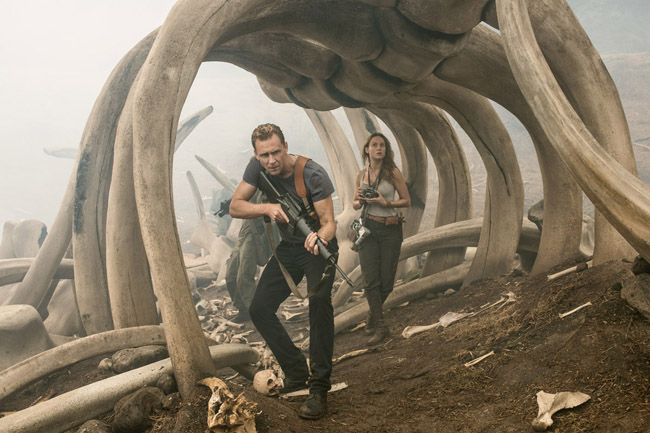 Since 1933, the giant ape, Kong, has been the subject of at least seven movies either in an original storyline or via remakes including the last offering with Peter Jackson’s 2005 remake of the 1933 original, King Kong.  Whilst Jackson’s offering was not quite up to epic proportions, Kong: Skull Island only out ape’s it with its CGI battles of ambitious impressiveness.

Director Jordan Vogt-Roberts makes it clear he is under no illusion as to what audiences want, a movie engulfed in blockbuster fodder with a quick introduction to our 100 feet tall ape. Battles of monster magnitude and a storyline that hits 0 to 100 at the bat of an eyelid, one that is so thin it’s almost transparent, it really has no place for its human characters, who, throughout most, are simply just supporting roles with no real purpose and are killed off no sooner as they are introduced. Kong: Skull Island may have a massive amount of flaws but hell is it a lot of CGI fun.

Set in 1973, during the latter part of the Vietnam War with the US very nearly admitting defeat, the head of a top secret task force, Monarch, Bill Randa (John Goodman) assembles a team of highly skilled scientists, military men, a tracker and photographer for a mission to the ‘newly discovered’ Skull Island for a resource gathering mission. Kong makes an entrance worthy of his stature at a very early stage as the team descend on Skull Island through an enormity of rage which rectors off the scale reminiscent of Apocalypse Now. As the surviving team hit the ground they find themselves in a race against time to cross the island through challenges so unimaginable its inevitable they become disposable.

The military team is lead by Lt. Col. Packard played by Samuel L. Jackson in a role that is doused in Jackson’s motif – an unlikable man, like most military leaders, thinks his way is the highway and lord help anyone that goes against his word or actions. Tom Hiddleston as tracker, Captain James Conrad – looks the part with a moral streak but does not much else than run around with a gun in his hands looking pretty. Talking about just looking pretty, Brie Larson as Anti-War Photographer, Mason Weaver, is also completely wasted with only a line or two and a whole bunch of compassion for one of the largest Kong’s to ever appear in film. The only human worth their weight in animal magnetism is John C. Reilly who plays Hank Marlow, after having spent the last 28 years on Skull Island after a crash landing during World War II knows the creatures and the natives of the land well enough to bring the sense of light-hearted humour.

The highlight here is the sheer scale of battles Kong grapples with on a daily basis, the ludicrous oversized insects and monsters that inhabit the island are beyond wild imagination. There is a stick insect that has the familiarity of Liam Neeson’s tree in A Monster Calls, spiders as tall as tree’s with legs like bamboo sticks, a randomly placed buffalo and an evil enemy of all which lives underground. Kong glides through the jungle-like island with a protective stride and spears anything that is deemed a threat on tree’s just like he is preparing a banquet of human kebabs. Pairing the highly skilled CG action sequences with the colours that are rich in tone yet soft to the palette create quite a stunning and awe-inspiring vision.

Kong: Skull Island may be another disposable remake of a film that quite clearly puts bums on seats, and is pure in its entertainment value and fun, but its lack of character development for its leading protagonists leaves a flat empty feeling of nothingness. If you stay to the very last closing credit, and there is a long wait, there is an extra scene which tells us this isn’t the last time we’ll be having fun with this oversized ape.