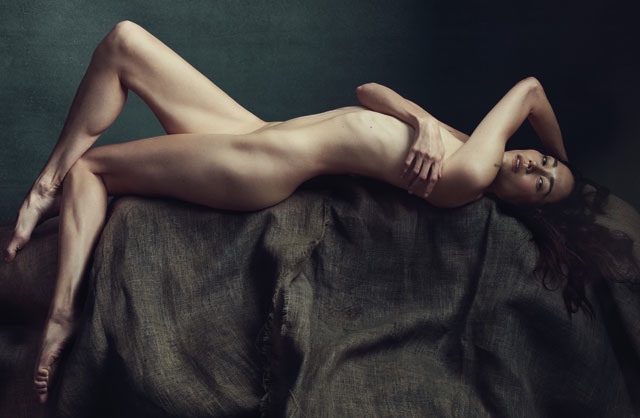 Allure Magazine‘s nude series 2015 tapped five actresses to strip off to their birthday suits for an all naked series photographed by Norman Jean Roy.

The images feature Laverne Cox from ‘Orange is the New Black’, Jordana Brewster from ‘Furious 7’, Katheryn Winnick from ‘Vikings’, Nicole Baheri from ‘Sleepy Hollow’ and Sandrine Holt from ‘Terminator Genisys’.

Every year Allure Magazine release a nude edition featuring a selection of hot female celebs, 2014 was headed up by Kirsten Bell, 2013 was Claire Bowen, 2012 was Taraji P.Henson, 2011 was Keri Hilson. The list goes on. About going nude, Laverne says, “I said no [to posing nude] initially, thought about it, and said no again,” she says. “But I’m a black transgender woman. I felt this could be really powerful for the communities that I represent. Black women are not often told that we’re beautiful unless we align with certain standards. Trans women certainly are not told we’re beautiful. Seeing a black transgender woman embracing and loving everything about herself might be inspiring to some other folks.” Jordana Brewster says, “There’s a strength to the portrait that I’m really proud of. Having to wear those tight outfits in the [] franchise has helped me keep fitness a part of my life.” On the secret of posing nude, Terminator Genysis‘ Sandrine Holt says “You want to have tension in your body. It helps show the muscles and makes things look nice.” Nicole Beharie from Sleep Hollow on the best part of the shoot says “I just turned 30, and I was really nervous [about posing]…. But I wanted to celebrate and accept my body in an artistic way.” Viking’s star Katheryn Winnick on how she prepped for the shoot says “I called my girlfriends and asked them to pose naked to show me what positions look good. I have a few crazy photos on my phone.”

Go behind the scenes with the video below and be sure to visit www.allure.com to see the full story.