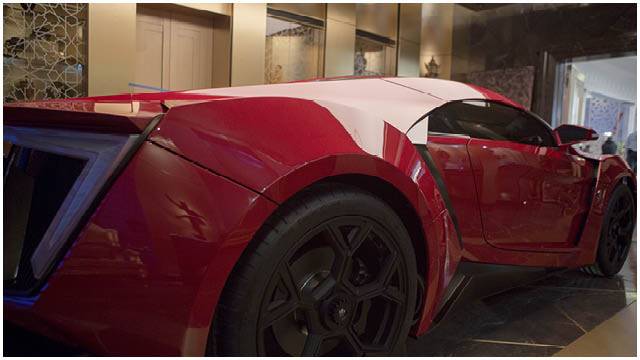 On Wednesday the 1st of April, Flavourmag and select participants were invited to watch the latest installment to the Fast & Furious franchise. The cars of Fast and Furious 7 including the Lykan Hypersport, Bugatti Veron and Aston Martin DBS are all featured below.

Furious 7. The screening happened in Atlanta, Georgia and was complete with an exotic car expo just outside of the showing cinema.

As many now know, Furious 7 was Paul Walker’s last film with the franchise before he himself lost his life in a horrific car accident that involved a lovely 2005 Porsche Carrera GT. A car that put out 612 horses! And although Cody Walker was used to fill in the scenes that his brother was meant to be in, the movie was shot in such a way that one could hardly tell that Paul Walker was not actually in a few of the scenes. Nevertheless, Furious 7 delivered on the high octane action! Throaty engines, screeching tires, massive explosions, enough sexy ladies to make any man or grown woman fall to their knees including Fast and Furious 7 Ramsey, Michelle Rodriguez, Rhonda Roussey and automatic gun fire all bellowed through the cinemas high definition speakers!

It was, in fact, all that one has come to expect from a Fast & Furious film. Except for one aspect. The introduction of a thoroughbred and vetted villainous element. Portrayed by none other than English badass, Jason Statham! Of course driving the beautiful British-made Aston Martin DBS with all its 510 ponies! In all honesty, it was his character that brought this film up a couple of notches. Those familiar with Jason Statham films certainly know what he brings to the table and he did not disappoint!! Although very rare, in this case, I found myself rooting for the bad guy. Albeit silently. As far as the rest of the cast, all stayed true to form with even one of the usual characters being given a more heroic part to play. In fact, this character delivered his extra heroic tasks so well, that the audience erupted in applause at one of his climactic scenes. (doing my best not to reveal any spoilers here). The other usual suspects when it come to cars in a film of this caliber were all present. You will see the Lamborghini’s, the Ferrari’s, and the Chargers. Even the Bugatti Veyron made an appearance. But without a doubt, the scene stealer was the Middle Eastern beast. The Lykan HyperSport. I am fairly certain I was been aroused by the sight and sound of it. With a top speed of 385 km/h and a whopping 770 horses under the hood, the Lykan is grown man business. And weighing in at a mere 1380 kg, its a supermodel in body and banshee spirit!

From all of the actors, reality T.V. stars, and media that filled the cinema, most seemed to be absolutely pleased with this film. Present company included! Especially with the way Paul Walker was honored in the end (sorry) while driving one of my personal favorites. A tuned up, cocaine white Toyota Supra gliding note for note ever so symphonically next to a monster late-model Dodge Charger that no doubt had about 900hp under the hood.

An unmistakable sound, those chargers. So the conclusion of the matter is, everything been heard, Furious 7 is the must-go film of the season! Read our full movie review here.

Fast & Furious 7 is out in cinemas worldwide NOW!