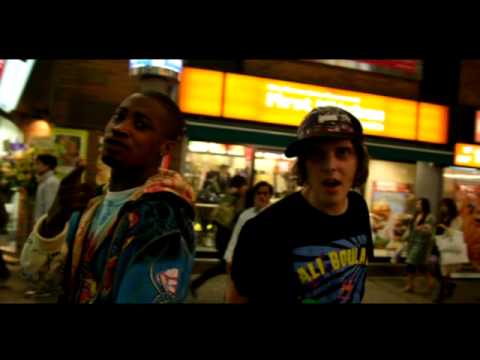 I’m a systematic person, I’m deeply organised, which is why every track on my iPod is organised too. I have a rock playlist, an rnb playlist, an old school playlist and so forth. But when I heard Lazee’s debut single Hold On, I had a dilemma on my hands.

The track had to go somewhere, but where? Lazee’s smooth flow suggested it was hip hop, but the Swedish rock group Neverstore’s sample on the chorus suggested it was indie rock. With no real answer I left it, and decided to create a new playlist, entitled ‘something different’ with Hold On being the only track that makes up the playlist.

Born in Sweden and originally from Ghanaian decent, but rapping in English, Lazee’s music is rooted in hip hop, but he doesn’t stop there. Lazee’s eclectic sound is hip hop, drum & bass, grime and house all fused together which stems from his ultimate goal – making good music.

His debut single Hold On is a fine blend of hip hop and rock, and he reveals that the track almost never got to him because he nearly turned it down before even hearing it.

‘I was touring and the producer (Yishi) picked me up from an airport one time and he said: “Yo! I got a hit for you!” I was like, I’m tired take me to the yard, and he said: “Nah, I got a hit for you, you have to come to the studio’. As soon as I heard it I wrote and laid everything out right there within 2 to 3 hours – and I was shooting a video the next month in Tokyo. I choose Tokyo because I felt like the track was so big in scale that the video needed to be on a par with the size of the track.’

Despite the fact that this will be Lazee’s introduction to the UK, the Swedish star has been around for some time. Hold On went Gold in Sweden and reached number two in the iTunes chart. The track reached as far as the States and caught the ear of Fred Durst who flew Lazee out to record another version of the track.

Lazee’s collaborations didn’t end there. One of hip hops most coveted DJs, Kay Slay hosted Lazee’s mixtape. ‘Working with DJ Kay Slay was dope, I finished the project and it was going to be my album and then Slay heard it and said he would host it, for a nice price!’

Working with DJ Kay Slay was what has undoubtedly propelled Lazee to greater heights, which now sees him recognised in the UK and Japan, as well as Australia, South Africa and France. And despite going by the name of Lazee, his stage name doesn’t reflect his dedicated work ethic to music which he feels was instilled in him through his upbringing and his Ghanaian background.

‘It’s about taking over the world, it’s the way my mother raised me. I’ve always been brought up with the attitude that the sky’s the limit. If you’re talented and God has blessed you in different areas in your life, just stretch your boundaries. Just look at me. I went from being a normal hip hop rapper having a mix tape with Kay Slay, to working with Sebastian Gilstrom who is one of the biggest house DJs in the world.’

‘I’m just focusing on making a good album. There’s going to be a lot of versatile music, the root of it is going to be hip hop, but I’m going to throw in house and rnb. People need to understand. I’m trying to set the standards for good music.’

And it’s entirely that, versatility on a variety of beats coupled with a smooth flow, Lazee has all the making of a very talented artist.

Hold On by Lazee feat. Neverstore is out now on Sony/BMG www.myspace.com/mrlazee