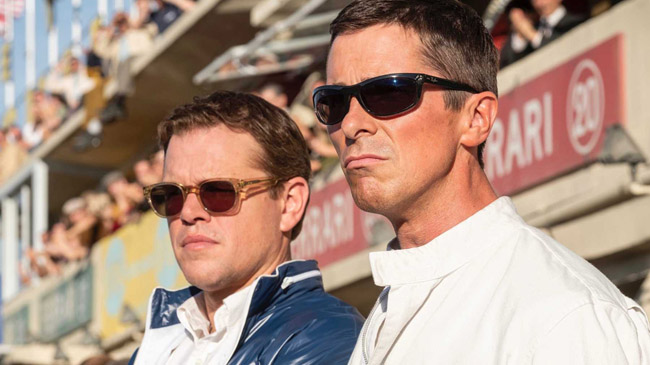 Buckle up and enjoy the ride, this one comes with a complete full-service history that corners like it’s on rails.

Soaked in blood, sweat and greasy oil, James Mangold takes pole position in the latest of a long line of sporting films that will grip hold of the speed senses.  Based on the true story of Ford Vs. Ferrari in which the two motor giants went head to head at the 24 hour Le Mans’ race in 1966 this speed demon will make you want to buckle up and enjoy the ride.

When Ford decided to take on the slick and sexy Italians everyone laughed in their face, but for all their cheap motors and high production turnaround they were fastidious enough to take on two of the best mechanics in town in the form of Shelby Carroll (Matt Damon) and Ken Miles (Christian Bale).  Shelby being the face of his own company is the corporate man who knows how to smooch the bigwigs and he manages to wangle Ford into letting him bring Miles on to the team to build that hunk of metal that will prove more than a competitor to Ferrari.

Miles, in complete contract to Shelby, is known to be brilliant but difficult. Rarely seen out of his greasy white attire, baring a mug of Yorkshire’s best brew, he’s prone to a few temper tantrums that include throwing wrenches at his buddies head, therefore making Ford very nervous having him on board.

Le Mans ’66 isn’t all about the motor-racing, it’s as much about the bonds of friendship between Miles and Shelby as it is about building a slick lightweight car that won’t blow you to smithereens or speeding around a track until you’re dizzy. Mangold has made this all about the build-up, detailed and intriguing character arcs are followed up with clever witty dialogue, some that see Henry Ford II (Tracy Letts) reduced to tears on the first test drive of his new weapon, better still, calling James Bond a degenerate because he doesn’t drive a Ford.

There is also a stark contrast between the suits in charge; Jon Bernthal plays the calming go-between who is secretly vying for Shelby and Miles to stick it to the doubters in charge. Then we have Josh Lucas’ dick Marketing man who despises Miles enough to try and jeopardise his own company’s track success. When a woman is rarely seen it’s in the form of Miles’ wife played by Caitriona Balfe, very much an advocate for her husband’s skills but still nagging him that he doesn’t spend enough time at home.

By this point, you’re already heavily invested but Mangold goes all out to rev up the intense ferocity once it comes to the big race. It may have a long-running time but thankfully those 24 hours are cut down to the last quarter of the film. The viewer is immersed into the driver’s seat as it cuts corners at high speed making you feel every part of the action. It can’t be stressed enough this needs to be seen on the biggest IMAX screen you can get to, to feel the full force and ferocity. Mangold has popped the hood, stripped out the engine and completed a full-service history that corners like it’s on rails.