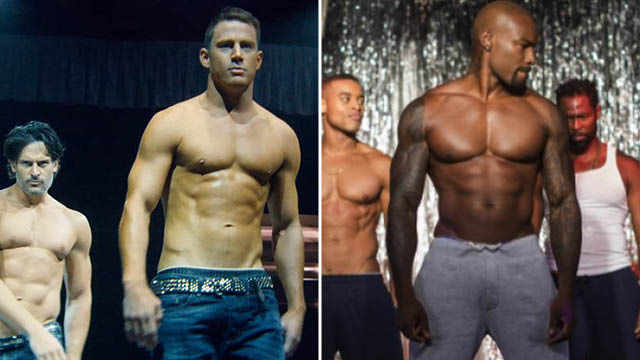 It would appear the year of the male stripper is upon us in movie land, and I for one could not be happier.

Fed up with seeing all those sexy scantily females, catering for the male population in our films it’s about time us ladies were subjected to a bit of sexy male flesh, it’s our time for some much-needed eye candy.

So with this in mind we decided to have a trailer-off between our contenders, Are you ready for round one (well there is only one round as you really don’t need anymore). Let’s get ready to rumble in Magic Mike XXL Vs Chocolate City Trailer off.

DISCLAIMER: THE FOLLOWING TRAILERS COME WITH A HEALTH WARNING! THEY MAY CAUSE HEART PALPITATIONS AND A FEVER.

Magic Mike XXL see’s the return of the very sexy Channing Tatum in the lead role of Mike.  The opening of the trailer, accompanied but the famous song Pony by Ginuwine, is very enticing as they cleverly focus in on Tatum’s spectacular guns (yes I mean perfectly defined strong arms) leading into a very suggestive scene of Channing working with his tools. What more could we want when we see him bust out his dance moves, subliminally we know if a man can move that good on a stage we can only dream of what he is like in the bedroom.  We also have another piece of fine ass to drool over in Matt Bomer, with his chiselled good looks and his perfectly defined abs what’s not to like, but let’s face it we all know we are only going to see this for the panty wetter that is Channing Tatum.

Magic Mike XXL is released in the UK 4th July

What better way to start a trailer than having a half naked, perfectly defined man whining away on stage. The word sex used numerous times to plant that seed while you’re watching lusciously moisturised male bodies, especially the damn fine Tyson Beckford, getting down and dirty sending the brain (and let’s face it our knickers) into a frenzy. For the whole 1 minute 34 seconds it virtually just doesn’t stop. As for the cast they really couldn’t have picked a finer bunch of the male species, We get to see Tyson Beckford in all his fine, perfectly formed splendour near enough naked, Robert Ri’Chard grinding his way to stardom, near enough naked. Michael Jai White being a booows with his huge guns a glistening and even the delectable Ginuwine proving he can still rock his Pony…. half naked, what do they say, Black don’t crack. PRAISE THE LORD! So our winner has to be, but only just, CHOCOLATE CITY just for the pure fact it has a lot more nakedness and a hell of a lot hotter cast members than Magic Mike.

Chocolate City is released in the UK 25th May

Let’s face it the storyline of both Magic Mike XXL and Chocolate City aren’t going to be enlightening masterpieces but who the hell cares when you have some fine white and dark chocolate to drool over for what an hour and a half. I can guarantee by the time you come out the cinema you won’t have a clue what just happened, you’ll feel like you’ve been hit over the head with a hammer and will want to latch onto your man for a night of passion.  I’m off to have a cold shower now, having to watch and re-watch those trailers time and again got me just slightly worked up. It’s a tough job.