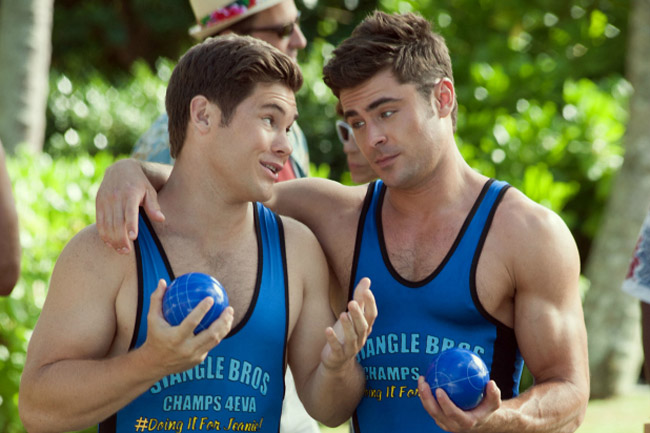 What you should know is that Mike and Dave Need Wedding Dates is loosely based around two real brothers called, well, Mike and Dave, in their search to find dates for their straight-laced sister’s wedding under her strict orders. What this culminates in is a film which is a one trick pony which relies too heavily on trying to be crudely funny.

Crude has been done to death and we were subjected to Zac Efron having to deal with his out of control Grandfather not so long ago in Dirty Grandpa. The problem is Mike and Dave Need Wedding Dates has taken that formula applied it to the females in the film – much like a role reversal situation – and failed to give us very much in the form of comedy – in fact, this critic only had two truly laugh out loud moments throughout the whole hour and a half. Not even the eye candy that is Efron could aid in the desirability of enduring such a mundane and unoriginal plot.

Mike (Adam Devine) and Dave (Zac Efron) can’t attend any event without causing some kind of drama, so with the upcoming nuptials of their little sister Jeanie (Stephanie Beard) both their parents and Jeanie and her husband to be call a family meeting to tell the boys they both need to bring down to earth dates in order to keep them in check. The brothers dote on their little sister and agree. The boys embark on a quest to find their perfect dates via social media and even the Wendy Williams Show. This is where Alice (Anna Kendrick) and Tatiana (Aubrey Plaza) get involved. Both in need of a holiday but with the lack of funds, this is the perfect option to get a free holiday to Hawaii. To be fair the girls are much brighter than the boys as they fake their girl next door images to win over the pair all starting from Tatiana throwing herself in front of a moving car to get Dave to notice them. As soon as the foursome hit Hawaii, the girl’s true personalities start to seep through with Tatiana completely uninterested in the reason they are there tries to ignore Dave. Her indifference screams right out of the screen and her dead eyes with no soul behind them is highly visible to see. She even has a scene of a sexual nature with Dave’s lesbian cousin where she actually gets her off just for free Rhianna concert tickets.

Alice on the other hand, whilst still full of naughtiness is the kind hearted soul, even when her good intentions don’t quite have the end result she was hoping. Thinking Jeanie needed to relax as her maid of honour was losing her head, she sets up a massage session ‘with extras’. The masseuse gives one of the strangest massages ever witnessed, with moves that any Olympic gymnastic would be proud of he finally brings Jeanie to climax simply via brushing their bums together. It’s this little revelation to Jeanie’s future husband which brings the whole sorry saga to a head. The problem with our female protagonist’s is they are nowhere as near as bad ass and full of drunken bravado as the trailer likes to make out. The film has a slight message of equality about it but you have to dig deep to find it. Yes, they can match the boys in their raunchy and ridiculous behaviour as we witness Alice (Anna Kendrick) wanting to loosen up the soon to be married sister of the boys by giving her an ecstasy tablet and the pair frolic naked amongst some horses. However, deep down, it’s plainly obviously that these are just two girls, unhappy with their lot and longing for relationships where the men actually treat them with respect and lavish them with romance – a bit like the females in many cheesy rom-com.

Mike and Dave Need Wedding Dates is out in cinemas Wednesday 10th August.