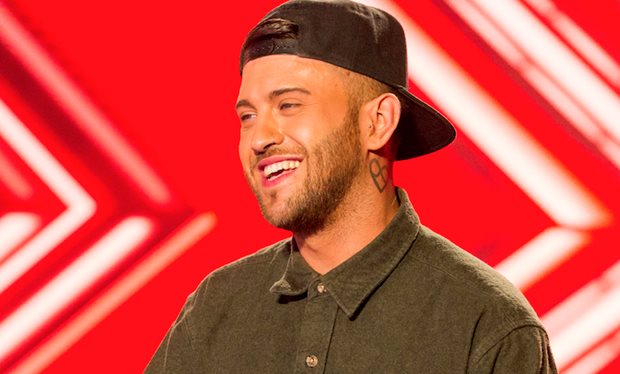 Introducing to you the sensational 25-year old X Factor contestant who left the judge’s stumbling over their own words within his very first audition, Mike Hough.

Mike first auditioned for the show back in 2009 and believes that he is a “completely different person” after having the time to experience more in life as well as in the music industry.

Hough places confidence in his words.

“Now I’m no longer afraid to pour my heart out on a song or on the stage. I think I used to feel vulnerable back then as I was so young but now I’m a man and the difference shows”.

Leaving his 2009 audition in the past, Mike emphasised that it took him a while to find himself ‘as an artist and as a person’ and quickly elaborated upon his perspective.

“I’ve had some really cool experiences in the past with music but I was still learning throughout them all, now I finally feel like I know who I am and where I wanna be/go and I’m ready to take on the world!”

Presenting himself as a professional musician, with a powerful array of vocals when covering Ironic by Alanis Morisette, Mike left the nation singing his prays.

“I didn’t know how it would go down, but I didn’t expect that, it’s been a huge moment in my life and people have been so kind and so warming to me. I’ve been stopped in the street and wished good luck, and had so many messages. It’s so humbling and makes me realise why I love what I do, because it brings people together.”

Shortly after the show was broadcasted in the UK, it quickly made its way to the television screens of the US, where Mike gathered a fantastic reception – his following now including an international touch.

Mike shared his musical aspirations for across the pond with us.

“I hope to take my music worldwide! America is definitely a place I would love to conquer and I’m truly grateful for all their support, and I just hope I can go on to make it even more known and more great”.

Luckily enough for those who have taken to Mike dearly, have the pleasure of getting a listen in on Mike’s independent work. The X Factor hopeful has been so close to ‘making it’ in the past with amazing tracks such as ‘Stained’ and ‘Better’, which was shortly released after supporting JLS on their ‘Farewell’ tour back in 2013.

Mike talked to us about one of his favourite tracks ‘Beautiful Gone’.

“I wrote that song so quick as it just flowed straight from the heart and it was actually that song that changed everything for me as it felt so right, and I knew at that moment that I had found myself as an artist, something I had waited years to feel”

His friendship with the JLS singers has only made him more determined with the new journey that he is leading.

“They encouraged me to take risks, never give up, and keep believing. They are proof that timing is everything and I’m just praying that regardless of the outcome with the show, this is now my time”.

Our fingers are crossed for you, Mike. Listen to Mike Hough on Spotify and follow Mike on twitter @mikehoughmusic