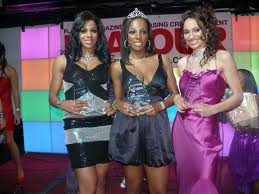 2008’s annual Miss Flavour Beauty Pageant took place on Wednesday 5th November in the heart of London’s Leicester Square at Sound nightclub. Hosted by comedy duo JCX ‘n’ Slick and Pretty Polly model Sasha Parker, the night kicked off with laughs all around and an upbeat performance from urban rock act Kaya who set the scene for the night and prepared the audience for the biggest showcase of London’s finest young ladies. 14 beautiful contestants strutted their stuff down the runway, setting pulses racing at top speed amongst the gentlemen in the audience during the swimwear section, parading their summer attire to a panel of celebrity judges that comprised of Angellica Bell (CBBC, this months Flavour cover), Akosua Annobil (Choice FM-Girls like us, editor of overgroundonline), Kojo the Comedian, Confidence models CEO Nana A-Tamaloke and Semone Ballin Managing Director of International Creative consultancy and model management EndZone Image. The ladies, also had the opportunity to showcase their talents to the judges where amongst the young beauties were singers, dancers and poets, demonstrating that Miss Flavour 2008 should be more than just a pretty face.

Donaeo, who graced the audience with his two killer singles tearing up club land at the moment, Devil in a blue dress and African Warrior offered an energy filled vibe. Delinquent also took the stage with vocalist KCat who performed an effortless My Destiny and latest single I Got You, which also doing well on radio. There was also a performance from up and coming rapper Artcha.

Attendees of Miss Flavour were in for a treat as celebrities amongst the audience included actors Adam Deacon, Shanika Warren, Arnold Oceang (Kid/Adulthood) and Ashley Walters, BET award winner Giggs, GMTV presenter Michael Underwood, Mr Midas as well as an appearance from Ironik as they waited for the crowning of Miss Flavour 2008. The contestant’s final show on stage was of their evening gowns, where they anxiously awaited to find out the results. Miss Flavour 2007 Yondie Murray was on hand to give over the crown to Miss Flavour 2008 Sasha Bennett who sailed through each round and was extremely popular with the crowd. For more of her reaction, check out her blog. All in all it was a great night with an even better afterparty courtesy of DJ’s Ashinel, DJ Longers, DJ Chef and Top Boy Kae….. If you missed it this year, you don’t want be caught slipping next year!