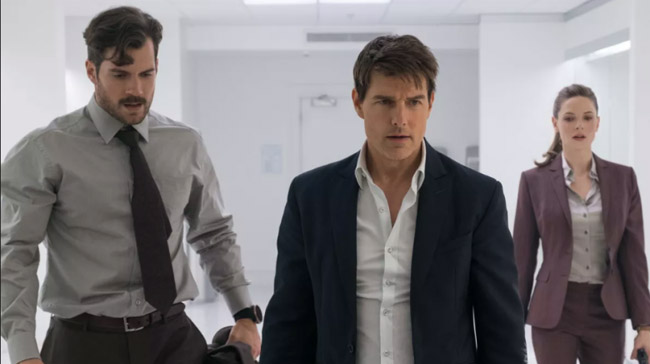 There is absolutely no doubt as to why Tom Cruise’s Mission: Impossible is the strongest franchise Hollywood has to offer. In a world where CGI rules the roost, Cruise and Christopher McQuarrie perform their high aerial stunts in the real world. Delivering a thrilling ride proving every mission they undertake is certainly possible whilst not scrimping on its entertainment value.

Events escalate no sooner as the picture opens; Ethan (Cruise) and his merry men, Simon Pegg’s Benji and the man-made wall, Luther (played by Ving Rhames) manage to lose three spheres of nuclear material. It proceeds to spend the next two and a half hours trying to get it back and save the world. However, it’s not that simple as the action-packed story weaves through the European streets of London and Paris with a few familiar faces popping up along the way.

Whilst Ethan is plagued with guilt and the haunting memories of his wife, Julia (Michelle Monaghan), Ethan’s boss Alan Hunley (Alec Baldwin) returns to continuously butt heads with Angela Bassett’s Erica Sloan. Continuing to think Ethan is moderately a liability; Sloan proceeds to assign the hulking August Walker (Henry Cavill) to accompany Ethan on his hunt to thwart the most recent threat. Each scene hereafter is a bit like me and my shadow between the pair, but there is certainly no love lost between the men as the masculinity fills the air. Even Rebecca Ferguson turns up as Ilsa Faust in the most random of spots. Not just to keep an eye on the situation, but also to give the men a run for their money in the sleek fight sequences as well. She also throws in that unspoken lust connection between Ethan and herself softening the violent edge.

Hats off to Cruise, after all these years, his adrenaline junkie side is still pumping strong and taking on 99% of his own stunts. Even his highly publicised ankle break whilst filming a building leap has been left in. It’s just as wince-inducing as when the footage was first published, but just reiterates the man’s professional insanity and desire to carry on. His staple running sequence is one to behold too, one that has become a bit of a running joke. At one point it becomes clear that Cruise is actually auditioning for a role in The Flash.

Even though the humour is nevertheless present, it is overshadowed by the jaw-dropping, flawless action set pieces; from watching Cruise sprint through the streets and rooftops of France to the incredible punch-up in the toilets of a club between Cavill, Cruise and the Chinese actor Liang Yang. The fighting is ridiculously relentless as they are punched through walls and slammed into porcelain sinks. Even though the bathroom is destroyed, the men just keep getting up. The winning sequence comes in the gripping dying scenes in Kashmir. Set amongst the glorious mountain setting, as two helicopters manoeuvre between themselves with Cruise dangling from a rope to finally cement his adrenaline lunacy.