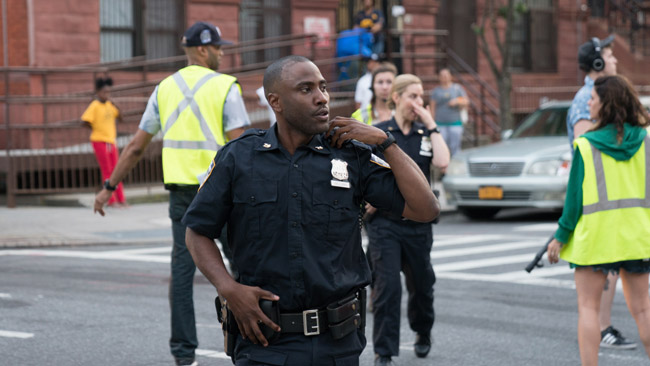 Sombre, gritty, timely and full of understated indignation but lacks a gratifying conclusion.

It’s a horrifying fact that we are only well acquainted to hearing and seeing on our news feeds more often than we should. First time director Reinaldo Marcus Green has added his voice to the rising amount of films in which we see trigger happy police brutality against unarmed African American men through the lenses of three different men with a quietening gaze.

The story is divided into three chapters, following the fallout on the lives of three men after an African American man was gunned down by police. The first chapter focuses on Manny (Anthony Ramos), a young man with a young family who witnesses the shooting of his friend and catches it on video on his phone. Keeping the actions of the cops firmly in the background, off-screen is soberly effective. With evidence of the shooting, Manny is harassed by nervous cops even breaking into his apartment to find a copy of the video. Until this point, Manny, at the request of his girlfriend, hasn’t made the video public, but it’s this one action that forces him into action and the video goes viral and the police vendetta steps up a notch as he finds himself behind bars and his chapter closed.

The second chapter takes on the view of and an African American cop and his own struggles within the police force at the time of the shooting. The strongest chapter of the three BlackKklansman’s John David Washington plays cop Dennis Williams, when off-duty minding his own business (even though with a gun firmly placed in his pocket) he still finds himself being pulled over by white cops for no apparent reason time and again. Green delves into his mind and the struggle he has with his loyalty to the force but also has a loyalty to fight for the wrongs being constantly dealt out to his race.

The third chapter is less than effective than the previous two and is vaguely connected through a handover as an African American Grade A-student on course for a scholarship is randomly stopped for a pat down and left scared witless he could be the next victim at the hands of the cops. With strong emotions bubbling he decides to join a group to protest against the police brutality.

There are no bells and whistles, or even a deafening noise of anger trickling through each intertwined chapter. Each man’s lives, after the fateful and highly questionable shooting of an innocent black man, is laid out in a more matter of fact format, a think tank of consequences. Each step is consciously thought out rather than reactionary – A realisation that their actions could see serious ramifications for their loved ones and even for their own lives’, certainly making them stuck between a rock and a hard place.

The frustrating downfall is the unsatisfying endings to each chapter, just at the moment a riling interest sparks we don’t get to see what happens in the following moments of the men’s lives failing to bring a gratifying conclusion. Green gives us that sombre, gritty angle doused in grey tones in the style of what Kathryn Bigelow’s Detroit gave us but on a quieter scale rather than the loud glossy anger that resonates – quite rightly so – from the growing number of films on this subject.

Monsters and Men is released in cinemas and on digital January 18th.