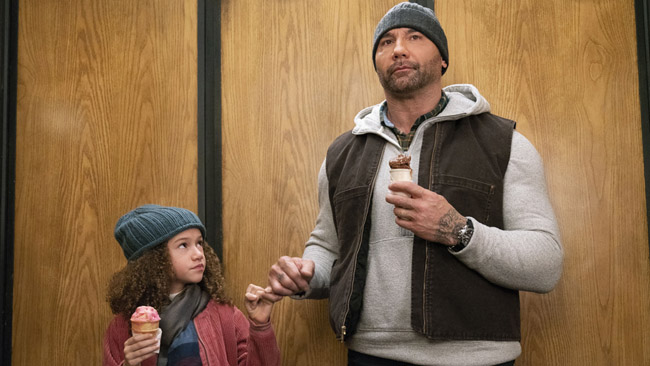 Dave Bautista gets outsmarted by a child in an action-comedy that doesn’t reinvent the wheel but delivers some cracking gags that will leave you smiling.

There comes a time in most burly actor’s life where they will find themselves paired up with a young child actor that inevitable runs rings around them. Guardians of the Galaxy’s Dave Bautista’s time have come in his latest film where Chloe Coleman proves no match for his less than intelligent CIA agent.

Bautista plays JJ, an ex-military man turned CIA agent who is certainly more brawn than brains. After he manages to botch an undercover sting, in which he gives a bunch a Russians a good kicking, he is assigned to carry out surveillance on the family of a criminal with his new tech partner. JJ is less than subtle in his duties when Sophie (Coleman) – the criminal’s niece – without any real trouble, blows his cover.

Blackmailing him into keeping his secret from her mother, JJ takes Sophie under his wing and teach her the ways of being a Spy –including walking away from an explosion in slow motion, without turning back.

Never reinventing the wheel, the concept is by far from original, taking its cue from films like Arnold Schwarzenegger’s Kindergarten Cop every minute is a lesson in predictability. Refreshingly though, it’s humble enough to laugh at itself, never taking itself too easily. It’s stuffed to the brim full of fun gags, mainly in reference to other films.  In the opening sequence, Bautista’s JJ takes a quote from Notting Hill and makes it his own with hilarious deliverance.

As we know Bautista knows how to flex his comedy chops but he also shows he is not all muscle; he gets in touch with his softer side as he builds a rapport with Coleman’s Sophie helping her to fit into her new school. He even gets his own little love interest too which opens up his character to broaden his horizons and his heart to the value of friendship and family.

Coleman is certainly a young force to keep an eye on in the future, making her character of Sophie look so effortless it’s clear she not only had fun but was allowed a free reign to run things the way she wanted to.

It may be all sorts of frightfully unoriginal fodder, it’s undoubtedly aimed at a younger audience, but there is much fun to take away from the simple gags that will keep this popcorn inducing Friday night movie make you leave with a smile on your face.