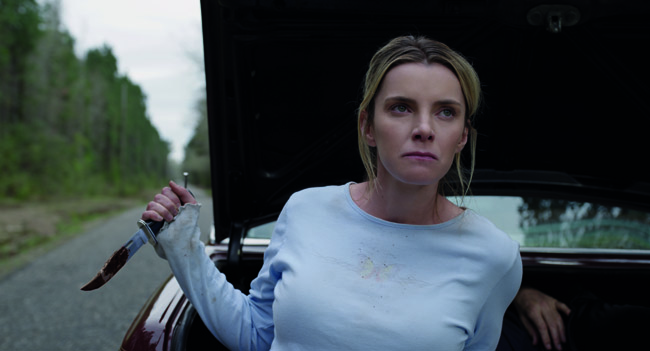 Despite its controversy and its Bone Tomahawk style violence, it has nothing to say, but it says it way too loudly.

Initially set for release last year, all marketing and the film’s release were pulled due to the controversy that arose from the trailers use of gun’s and the term “deplorables” coinciding with the mass shooting’s in America. Subsequent criticism from the Wotsit looking president put doubts on whether the film would ever see the light of day.

The film set up sees a group of American citizens, made up of trophy hunters, racists, misogynists and homophobes, more than likely Trump supporters, drugged and deployed to a field. On waking up, they are provided with a number of different weapons to defend themselves presented with a pig – anyone read George Orwell’s Animal Farm? – While a group of liberal elites hunt them down and shoot them like animals. It’s a basic game of survival.

Starring Hilary Swank as the leader of the wealthy liberal group, the film plays right into the hands of those that lean to the political hard right, depicting the liberal left to be the overly sensitive “snowflakes” that seek retribution if their feelings are in the slightest bit hurt. Yes, it’s supposed to be tongue in cheek, but you can’t help get the feeling those who were behind the making of this film did a lot of smug self-praise.

Whilst there is a smattering of nudge nudge, wink wink “humour” engulfed in some of the sequences, it lands with nothing but a dull hammer to the back of the head.  It’s one saving grace was the gruesomeness of its violence, not one for those with a weak constitution, with the sight of blood, guts and exploding heads, they really went to town S. Craig Zahler and Bone Tomahawk style to show the mere aggression that only the normal folk who sit somewhere in the middle of the political divide only dream about… and leave it there.

It’s hard to even fathom why there was such a stink about the film in the first place, it’s 90 minutes of a dull cat and mouse story that, despite the badass performances of its two leading ladies of Swank and Betty Gilpin, it has nothing to say but it says it way too loudly.

The Hunt is out in UK cinemas now.