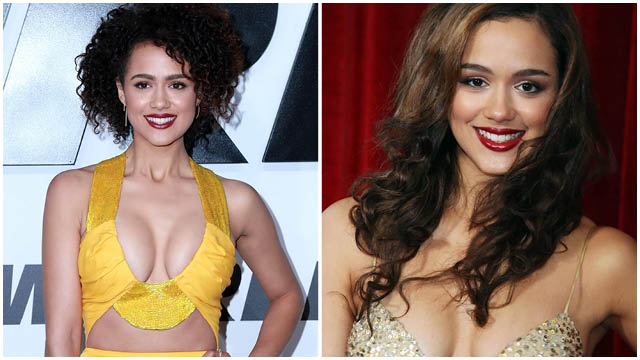 Nathalie Emmanuel is a twenty-six year old, English born actress who was raised in Southend-on-Sea, Essex with hair to die for.

From the age of 10, she was involved in mass productions such as the West-End’s hit ‘The Lion King’ back in 2006. From a young age she has taken the industry but storm with her talent, but where have you seen her before?

A key role where Nathalie may of first captured your attention would have been in the summer of 2006, in which Nathalie made her big break after successfully being casted for the role of Sasha Valentine in the award winning soap opera, Hollyoaks. Emmanuel described Sasha as having an “addictive personality” and as being “very immature. I think it comes down to her general lack of judgement!-she’s actually very unsure of herself”. The character has been at the centre of many high profile storylines including experimenting with recreational drugs, a heroin addiction, prostitution and being a victim of a series of violent attacks. Nathalie continued to play the role of Sasha Valentine until August of 2010.

Shortly after the role of Sasha Valentine in Hollyoaks, during 2011 Nathalie moved onto another soap based character in Casualty and took part in an episode by the name of Cheryl Hallows.

Later in 2011, Nathalie found herself in the set of season 3 of Misfits, a British science fiction comedy-drama television show, on E4, about a group of young offenders sentenced to work in a community service program, where they obtain supernatural powers after a strange electrical storm. Nathalie takes up the character of Charlie, who is short lived. To summarise the episode, Nathan has gone to Las Vegas to use his super-power to cheat the casinos. He is quickly replaced in the team by ladies’ man Rudy, an old flame of Alisha, who has the ability to twin himself – when stressed. This incurs the wrath of pick-up Tanya who believes he is two-timing her and who gets her revenge by killing Charlie (aka Nathalie), the girl she saw Rudy kissing and framing him for the murder.

One place where you are more than guaranteed to have come across the twenty-six year old beauty would be for her leading role in the American fantasy drama, Game of Thrones, between 2013-2015, where she plays the character of Missandei. Missandei is a major character in the fifth season of the show, she initially appeared as a recurring character in both the third and fourth seasons. The character is a slave, who once served as a translator to the Masters of Astapor, however Messandei was freed and now serves for Daenerys as her trusted advisor and handmaiden.

Nathalie’s latest feature is in the hit American franchise and hugely anticipated, Fast and Furious 7 – which is a series of action films, based on illegal street racing and heists. Nathalie Emmanuel plays a British computer hacker called Ramsey and the creator of God’s Eye, a program capable of tracking a specific person through digital services. Ramsey was a prisoner of Jakande, until Dom and his crew rescue her. Subsequently, she assists Dom and his crew in collecting the God’s Eye, which had been sold away to a Jordanian prince by her associate Safar despite her previous warning to keep it safe. When they lose the program to Jakande, Ramsey attempts to help the crew to hack and regain control of it.