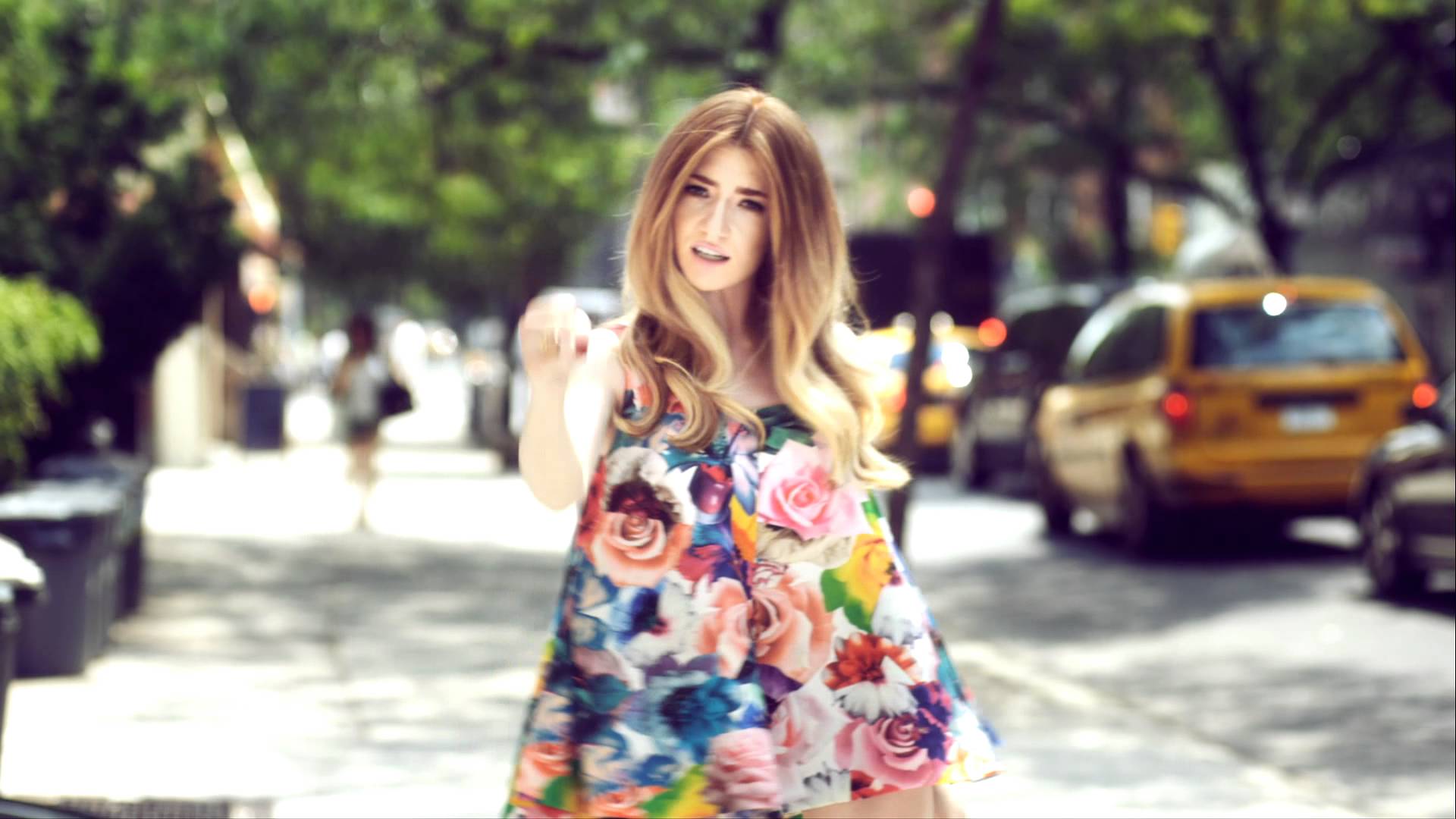 Let’s be honest, when Girls Aloud announced their temporary split in 2009, most bets were on Cheryl Cole as most likely to have a fruitful solo career. Fast-forward to 2011 and no one could have predicted the current footing in this illusory race to the top between the five former band members. Often dismissed as just ‘the ginger one from Girls Aloud’, Nicola Roberts is on the verge of pipping her former bandmates to the post – and in spectacular form. Flavour speaks to the Liverpudlian starlet prior to the release of her second single ‘Lucky Day’, a catchy, edgy pop record, with vocals reminiscent of 80s Blondie. The colourful and quirky video that accompanies the single was inspired by ‘The Message’ by hip-hop legend Grand Master Flash. Although she looks both stylish and effortlessly stunning, Nicola explains why there is no beauty without pain and no success without hard work.

‘The video was shot in New York in the absolute sweltering heat,’ she says. ‘It was like 128 degrees. It frustrates me that you can’t feel how hot it was when you watch the video. The film crew came out with a huge spray can of factor 70 sunblock for me – I didn’t even know factor 70 existed until that day. Every time the director would cut, I’d run into a shop and pretend to buy something so that I could stay in the air con [laughs]. It was all worth it in the end.

‘I would have liked it to have been a little bit grittier, a little bit more like the original Grand Master Flash video – but obviously it’s a romantic pop song, so it was important not to stray too far away from that. I’m dead pleased with what we achieved, especially as the video was my own concept initially.’

Since taking a break from Girls Aloud, Nicola has been avidly working on her solo album, and after 18 months of solid hard graft, her debut, Cinderella’s Eyes, is now complete. Be forewarned, this is an album far removed from the conveyor belt of generic pop records, with clichéd subject matter and unchallenging production techniques. Yes, Cinderella’s Eyes is a pop album with a difference. Each of the 12 track offerings are co-written by Nicola, who has also enlisted a team of cutting-edge producers, such as Diplo, the Invisible Men and Metronomy. With all these factors married, Miss Roberts has produced a stellar body of work indeed.

Working on her own solo project has given Nicola a clear boost of confidence and also the freedom she has been craving artistically for some time. ‘On one of the tracks, “Beat of My Drum”, I really felt that I was in a great place when I wrote that song. I felt that every day I was achieving something new. Just being at the studio every day and doing what I love, on my own terms, added to my confidence every single day. Around eight months into the record, I stopped and looked back at what I had done and how much I had achieved on my own, and I just felt really fulfilled.

‘Looking at what I had made and what I had written, it was such an achievement, I was so proud. I felt that I was in a place where I could confidently sing those words. I had gone from being a girl that was really shy, scared to say the wrong thing and not having a lot of confidence, to then being at the studio every day and believing in what I had done so much. I was in a place where I could really sing about myself.

She adds, ‘I feel I’m at my most confident when I’m being creative. Even with creative decisions, like cover artwork or a mix that has come in… I won’t let anyone else make any single decision for me.’

Aside from the refreshing, edgy side to this album, another very stirring factor is the sheer honesty and raw emotion each song conveys. One track that really stands out is ‘Sticks and Stones’, where Nicola pours her heart out with a very honest and raw account of her time in Girls Aloud, the pressure she felt about how she looked and being in the public eye:

‘How funny that I was too young for so many things/ yet you thought I’d cope with being told I’m ugly/ over and over I’d read it/ believe it/ said no to the shrink/ I can fix me I think.’ Looking back on her career, you can easily piece together Nicola’s pain regarding her pent-up insecurities. When asked in a previous interview when her worst year was, she said, ‘2003 to 2007’, which spans her whole period in the band.

‘There has to be a media,’ she says, ‘but negative opinion feeds a side of society that really doesn’t need feeding. Having comment pages on websites… honestly, the comments that some people leave are so sick. You do harden to it and also you change your mind’s perspective and you understand a bit more about the people that leave comments like that, but there is no need for there to be 20 pages long of people leaving such brutal and sickening comments.

So how has she coped with this heartless onslaught of remarks? ‘I’m so immune to it now. I’ve seen the same things that are written about me, written about Beyoncé. So I feel like, if they can say that about Beyoncé, no one can ever escape it. I think comment pages on websites just give people a place to vent. It makes you see how messed up that side of society is, people needing to feed their own egos is very majorly out of control.

‘I lacked confidence in the band,’ she explains. ‘I don’t really know why, I was just nervous, I was shy, I was scared to say the wrong thing. It’s hard in a band. I didn’t want to be the one who looked out of place in the photographs, or who would say the wrong thing in an interview and screw it all up. I think I was so shy I just didn’t know how to be. It wasn’t like the band made me insecure or anything like that. It just happened that I was in a band and I felt like that at the time.

‘Now it just so happens that I’m not in a band and I’m much more confident as a person. I’ve grown up a lot and I’m not afraid. I have confidence in what I have to say and I believe in my own creativity.’

Having to deal with all the negative scrutiny in regards to her looks has forced Nicola into a place of positive acceptance. Launching her Dainty Doll make-up range, tailored to women with pale skin, and being a firm advocate of ‘Team Ginge’, the look which once brought her so much angst, she is now a beacon to many young women, encouraging them to embrace their natural complexions, features and hair colour.

‘Just a couple of weeks ago, in fact,’ she says, ‘you know when you have those days where you feel, like, my hair is a mess and I feel like complete shit. I wasn’t feeling great and looked on Twitter and a girl had tweeted me, ‘You make it cool to not be perfect,’ and it really touched me. I tweeted back, ‘Before that tweet, I was having a really bad hair day, but you’ve put everything into perspective.’

It’s not all about looking or being perfect, it’s about being an individual. The most important thing is being who you are, nobody else is you. Just be you, otherwise f**king hell, how hard is life? I was like that myself for a long time and it took me years to get to where I am now. I can’t bear the fact that people feel so down about themselves, life is hard enough. How can you let your personality come out, if you’re so hung up about your side profile, your hair, your this, your that?’

However, it isn’t all deep, dark and meaningful, there is a very fun side to Nicola Roberts, who ad libs all over her rap albums and has also been known to shake a leg in the form of her alter ego Ragga Girl Ginge. ‘Ragga Girl Ginge is me – a pale white girl with ginger hair – trying to dance like a Jamaican, with all the little booty baps and those kind of moves [laughs], I love it.’ With all the right moves, Nicola is getting her fairy tale happy ending, and then some.

‘Cinderella’s Eyes’ is out now