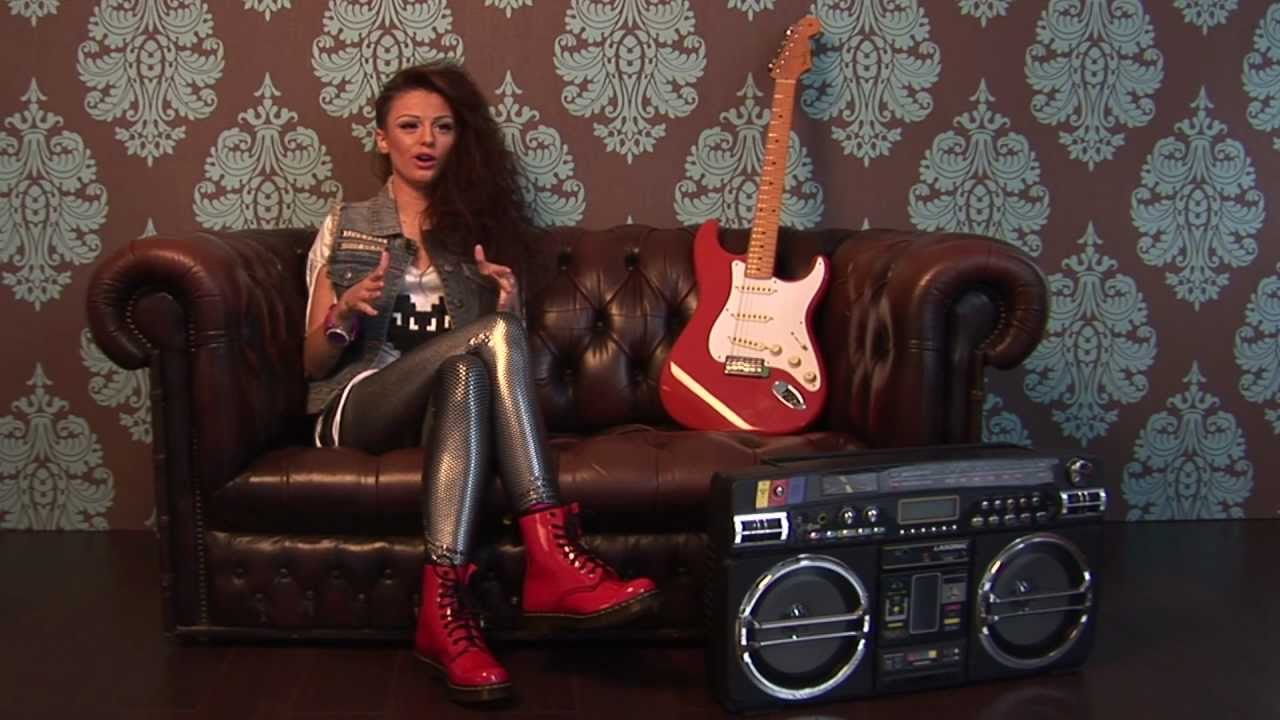 Hip-hop heavyweight Busta Rhymes featured on her single ‘Grow Up’ from her forthcoming album Sticks & Stones, a mix of nursery rhyme style melodies, quick raps, and floating vocals, with a number of urban influences. Acclaimed UK MCs Ghetts, Mic Righteous and Dot Rotten co-signed the singer by rhyming on ‘Dub On the Track’, a baseline heavy, infectious dubstep track. She’s already worked with some of the most highly sought-after producers in the world, from RedOne (Lady Gaga) and songwriters like Savan Kotecha (Usher, Britney). Yes, whether you love her or loathe her, former X Factor finalist Cher Lloyd is here to stay.

We’re expecting a tornado of an arrival, the same spirit and energy that she captivated us with at her first X Factor audition. But as Cher walks into the Flavour studio for her cover shoot, in a brown tracksuit, hair tied back in a bun, accompanied by Russell from her management company Syco and trainee hairdresser boyfriend Craig, she’s more gentle breeze than whirlwind.

As we usher her into hair and make-up she appears nervous. Despite having appeared weekly in front of millions of viewers on Britain’s biggest reality show, the 18-year-old songstress is actually pretty shy. But with reassurance from our styling team, she begins to relax and lets them know what she does and doesn’t like. ‘I love big hair,’ she says. Cher Lloyd is in the building.

And once she’s steps on set, Cher’s a different person. With each click of the camera she poses with fluid ease. ‘That’s a wrap,’ says the photographer, right on time for Cher to pop out for a cigarette before starting the interview, when she tells Flavour about new single ‘With Ur Love’, Cheryl Cole, and her complete lack of cooking skills.

So The X Factor is off again… If you were a contestant this year, who would you like to be your mentor?
Between Kelly and Tulisa, probably more like Tulisa.

Why?
Because I love the way she’s got to the position she is today and I like her style of music; I liked N-Dubz and I really like her as a person.

Are you still in contact with your former X Factor mentor Cheryl Cole?
No [laughs]. How did you feel when people used to compare you?
Some people said I look like her, or blah blah blah… You know what? I’m my own person; I look like the way I wanna look. They can compare, but I truly think I look nothing like her; I am nothing like her. It’s a compliment, though.

You’re from Malvern, Worcestershire – how has moving to London been?
It’s been my first few weeks; I’ve been living in and out of hotels before now. It’s really stressful living out of a suitcase, so now it’s really nice to just live properly without worrying. So yeah, it’s really nice having your own space.

Do you miss home?
Yeah, I miss home a lot. More than I thought I would, because obviously being young and stuff, when you move out of home people are like, yeah, I can do my own thing. But serious, I would much rather be with my mum and dad; I’m a daddy’s girl.

Sweet. How are they coping without their little girl?
Well, my dad’s really upset about it; he’s ringing me constantly to check if I’m all right, because obviously I’m not too good at cooking and I’m not familiar with a washing machine… I’m just learning.

So if you were at home for dinner this evening, what would you cook?
Chips, fish fingers and beans, probably something like that, something basic. If not I’d order a Chinese or something; I’d live on Chinese quite happily.

Are you worried about your relationship with your family now you’re away from home?
No way, I’m not worried at all. I know they will always stick by me and they understand I’m very busy; you know, I’ve got a lot of things to be doing and I never really get a day off, and they understand. I keep in contact with one of them every single day.

And when you do get a day off, what do you do with your down time?
Stay in my pajamas all day, just chill out and think about how grateful I am to be doing it. It’s a reality check when I get a day off, it really is.

Tell us about your album Sticks & Stones.
My album isn’t one specific sound, it varies throughout the whole record. We’ve got songs that are slightly dubsteppy; we’ve got maybe a ballad on there; you know, it’s all very, very different; but I’m so lucky to work with the producers that I have done and get the people I have collaborated with.

What was it like working with some of the grime elite – Ghetts, Dot Rotten and Mic Righteous?
I love them as artists because I’ve listened to them for a very long time, and working with people like that means a lot more to me than working with big-time artists. It’s the whole respect thing, they’re not embarrassed to jump on a track with me – that’s a big thing for me.

You also worked with Busta Rhymes – now that’s major. How was it?
You know what? I had no contact with him. The funniest thing about this music business is people always kinda assume that you sit down and write that track with the other artist. Me and Mike [Posner], we worked in the studio together, but me and Busta didn’t.

How did you like working with Mike Posner on second single ‘With Ur Love’?
He’s very relaxed; I like that about people, you know, when people don’t have to hype themselves up. It’s more about the music, rather than I’ve done this and I’ve done that.

Who else would you like to collaborate with?
Obviously Nicki Minaj; she is my biggest inspiration ever. To have five seconds with her just to say hi would be enough for me. But you never know, down the line something may happen.

Well, you’ve met Lil Wayne, so Nicki Minaj is next up…
Hopefully, you never know… Yes, he was so nice to me, which made it such a nice thing to happen.

While Nicki has her ‘Barbs’, you’ve got a name for your fans as well, haven’t you?
Yeah, Brats, but I don’t really know how that came about.

Do you like that?
Yeah, kinda. I am a little brat, I hold my hands up to it. I know people don’t like it, but you can take it or leave it… walk away.

Do you know you’re a brat because people have said that to you or do you just know you act that way?
A brat is kinda like the wrong word, but I just think it’s fun. I do know what I want and therefore I try my very hardest to get it. Yeah, sometimes I can have a rant and a rave, I can be a bit of a drama queen, but at least I can admit to it.

I do know what I want and therefore I try my very hardest to get it. Yeah, sometimes I can have a rant and a rave, I can be a bit of a drama queen, but at least I can admit to it.

On the one hand you’re really shy, but on the other you’re gutsy and say what you want.
Well, the thing about me, if there’s a situation where I don’t need to be charging in, saying this and that, I’m not gonna because I’m happy with everything around me; but if there’s something that’s not right and I feel it’s gonna be wrong for my career or anything like that, I have to stop it.

So since The X Factor finished and you released your first single, you must have had your first paycheck. Did you splurge on anything?
I’m not a big splurger. What I believe is that I was all right before, nothing has to change now. I’ve got a few more pennies in the pocket, but nothing will ever change.

How are you managing to handle the paparazzi?
Paparazzi are paparazzi – they’re always going to be quite ballsy; they’re in your face and you’re never going to get rid of them. But you know what? They keep you going. There’s no point me complaining, because they’re the people that get me in magazines – so like people you don’t have to pay to get you publicity; there you have it.

You’re 18 and while many people your age are probably studying, you’re working on pop stardom. Did you want to continue your education?
I was never going to do that; I was rubbish in school, I wasn’t a very good student. I kept getting suspended and I didn’t want to be there. This is the life I’ve always wanted and thank God, I’ve got it.

Find out what else is in this issue

Did you have a back-up plan?
I did. I actually wanted to be a teacher or police officer. But I always knew I wasn’t going to do that – this is what I was going to do and if I hadn’t, I would still be trying now.

Do you feel any pressure with being a role model now?
I am me; I’m not gonna change for anyone. I’m not an angel, I wasn’t sent down to help people – tell them not to do this and not do that. People will do their own thing no matter what I say. If I could help a young girl, to do with self confidence and stuff like that, I’m down for that; but I cannot change the world, and I’m not going to try.

What are you looking forward to most in the future?
Having more large events. I love being on stage; it’s the whole point of being a recording artist – you get to perform. So I want to sell out arenas and be on stage as much as possible, performing and making people enjoy my music and realise that I’m actually an all right artist.

Your boyfriend Craig is reading a book about the music business so he can support you. That’s really sweet. How’s it going?
Really, really well. I like to keep my personal life away from other people. Everything else about me gets splattered everywhere. He’s my little bit I get to keep to myself. He’s the right person for me and he’s on my side, but there will never be anything that gets let out about him, never, nothing about our personal relationship.