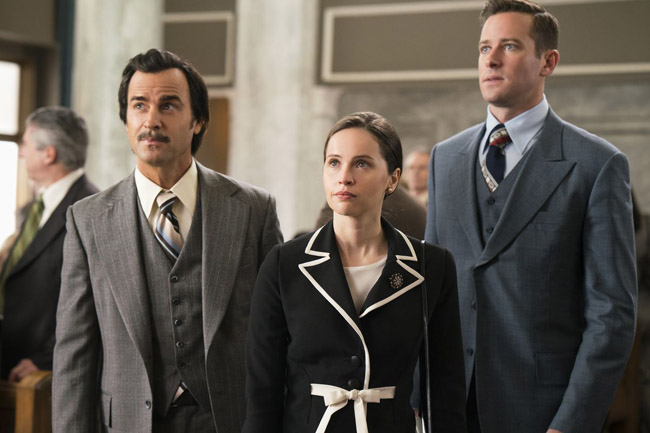 This is in no way groundbreaking stuff but it does rile up frustration on behalf of women everywhere with a clenched fist.

Deep Impact’s Mimi Leder follows the trend in the latest biopic that turns real-life struggles of women at the front line of fundamentally crucial work into a fascinating introduction to modern history. We’ve recently seen it in ‘A Private War’ which told the story of war correspondent Marie Colvin, now it’s the turn of another prominent woman of our time, Ruth Bader Ginsburg, the second female justice of four and Associate Justice of the Supreme Court of the United States.

This isn’t the whole life story of a woman who still serves in the court of U.S. law today, but one that takes the audience down the route of the inequality she faced trying to force her way into a wholly male-dominated career in the early stages of her life. Bader Ginsburg, played by Felicity Jones, is already a married woman with a young daughter when we first meet her. Having gained a place at Harvard she is met with ridicule and disrespect, not only the other male students but from the professor’s that run her classes.  Unable to complete her degree at Harvard due to family constraints, she leaves and heads to Columbia instead.

The sign of the times rings loudly in the ears of woman everywhere when Ginsburg, as expertly qualified as her male counterparts, is practically laughed out of every law firm she applies to in New York just because of her gender. Finally having to settle for a teaching job, teaching civil procedure, Ginsburg never quite loses her passion to fight in the court of law for cases that she is passionate about, gender inequality. She finally gets her chance to show her metal representing Charles M. Moritz, a single man caring for his ageing mother who was denied a tax break purely for being male and unmarried.

The idea that Ginsburg was some kind of rabid bulldog is thrown out of the window, Jones portrayal shows that this woman was timid and accepting of her so-called place at her young age, whether she thought it right or not. Although a twinkle in her rebellious eye is clear to see from very early on when the dean of Harvard has the female students to dinner only to patronise them and make them explain why they are simply better than the men whose places they have taken.

It’s empowering and informative but it tends to stretch out the plot when it doesn’t want to appear too hard hitting.  This is in no way groundbreaking stuff; it serves as a fluffy base in telling her story of indignation in the face of prejudice and it riles up frustration on Ginsburg behalf with a clenched fist.

On The Basis of Sex is out in cinemas February 22nd.