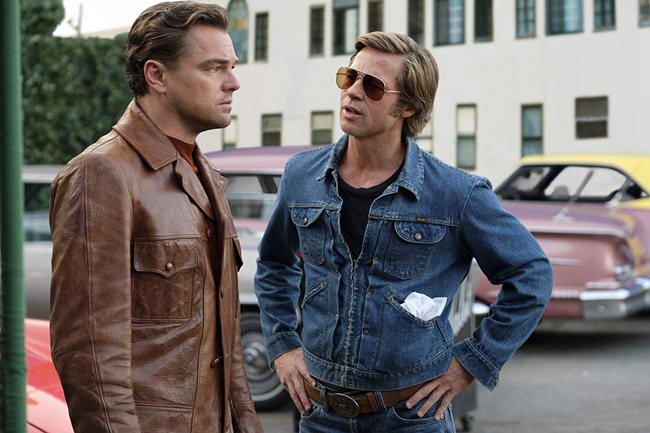 Tarantino’s love letter to Hollywood is rife with heady brilliance and controversy that will suck you in and spit you out.

Ever since the announcement of Tarantino’s ninth and penultimate film, assumptions this would be focused on the infamous Manson Murders of the late 60’s early 70s’, where rife. It’s worth remembering this is a Tarantino fairytale, a love letter to old Hollywood with the psychotic Manson cult lingering close to the surface. Another classic to add to the filmmaker’s cinematic arsenal but far from the violently volatile of those that have come before.

In what could easily be classed as one of Tarantino’s best films, authenticity courses through its veins from tonal sunset colourings and how Hollywood treats their ageing actors, especially in this era. Not quite set in a parallel universe it raises the question of how certain situations would have turned out with a few minor changes.

Leonardo DiCaprio plays cowboy actor Rick Dalton who just so happens to live next door to Roman Polanski and Sharon Tate, vanity at the core of his very being after years of being at the top of his game. Now age is setting in, a journey of self-depreciation begins to engulf his arrogant demeanour. This is only heightened when his agent, Marvin Schwarz (Al Pacino) suggests a move to Italy to star in a few spaghetti westerns. As Rick spirals into a hole of self-loathing, his best and only friend, Cliff Booth (Brad Pitt) is constantly at his side. Cliff is Rick’s ‘retired’ body double/stuntman but his role comes in many forms with assistant, confidant and personal chauffer after Rick loses his licence after a drunken incident all listed as part of his duties.

Careering through the minefield of Rick’s depression it’s clear that whilst some may think DiCaprio is the leading man this is very much the story of both men. Trying to keep relevant in the present day, Tarantino flickers through a collage of Rick’s films, scene by scene DiCaprio is explosive as he jumps from character to character. Then we have Cliff, a more laidback dude that takes life as it comes. Presumed guilty of an incident that happened earlier in his life, his face is not a welcome one on any set.

How does the Manson Family cult feature? It’s via Cliff’s constant random encounters with one of the females from the cult. Both taking a liking to each other Cliff offers to give the lady a ride back to the Spahn Ranch (the very location Rick and Cliff used to film their pictures together), the base of the Manson cult. This is accompanied by Margot Robbie’s Sharon Tate, another little fork in the Hollywood road.

From one scene to another we are greeted with glorious cameo’s from Al Pacino to Damien Lewis as Steve McQueen, the late Luke Perry to Lena Dunham and Dakota Fanning and even Kurt Russell. Tarantino also takes the opportunity to make a few digs, one much deservedly so at Roman Polanski but there is one scene between Cliff and Bruce Lee in which Lee is portrayed with colossal arrogance that won’t win over his critics.

If you know Tarantino then it will come as no surprise this is male-centric city and he just can’t help himself by keeping women in the foreground. The world revolves around Rick and Cliff but for good measure, Tate gets her very own lane with very little dialogue. Oh, and we can’t forget about a certain obsession with woman’s feet, constantly popping up to be front and centre of a scene. If you have a thing about feet you may want to look away, or not if you’re the filmmaker.

DiCaprio and Pitt are every inch the classic, explosive actor and together they are nothing short of brilliant. Tarantino tantalises from start to finish and it’s his ending that will get tongues wagging in more ways than one.