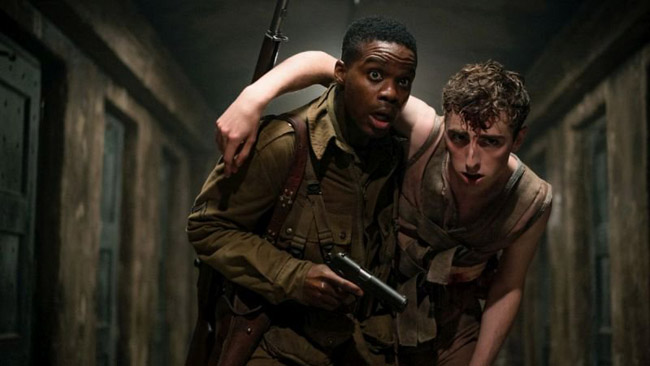 For a while, this JJ Abrams produced, Julius Avery directed, ‘zombie’ WWII gorefest was thought to be part of the Cloverfield universe, thankfully records were put straight and that particular universe should be pleased for it. There is little to rejoice over here, cheap, tacky and historically incorrect (poetic licence being its core excuse) but it comes with a touch of originality, a few jump scares and a whole lot of mutilated faces.

The scene is set with a company of paratroopers, idly chatting away in the skies over Normandy. On their way to a mission to knock out a German antenna placed on top of a church to make way for the Normandy landings. Before too long, first timer and the morally staunch Private Boyce (Jovan Adepo), the mysterious explosives expert Ford (Wyatt Russell) and the rest of the team find their plane is all but destroyed under enemy fire and only half the crew make it to the ground alive.

As the remaining members of the unit duck and dive their way through landmines they encounter a young French woman whose town is occupied by the German’s. Striking up a bond with Boyce, the woman she takes them in and hides them from the enemy as they figure out how to carry out their mission.  Boyce soon finds himself on a reconnaissance mission of the church and whilst wondering the dark and dank passageways he encounters a whole lot more than he bargained for.

Just to bang it on home, Nazi’s are bad, in fact, evil, and quite rightly, they certainly don’t get a reprieve in Avery’s dalliance. This particular set of Nazi’s are carrying out their own experimental research on the mutilated locals in order to create super soldiers that will make up the thousand year Reich with a deadly serum.

Avery has the right amount of guts and gore that will have you jumping out of your skin, but, for the most part, it’s tediously predictable. Thrown in for good measure we have the good cop/ bad cop relationship with Boyce and Ford. Boyce being full of morals, objecting to killing another human being against Ford’s macho masculinity who only gives a child a second chance under peer pressure.

Considering Abrams stature, it certainly looks like it was made on the tiniest of budgets; B-Movie quality it is, which undoubtedly suits its tone. But it does beg the question, is it truly time to bury the Zombie genre?

Overlord is out in cinemas November 7th