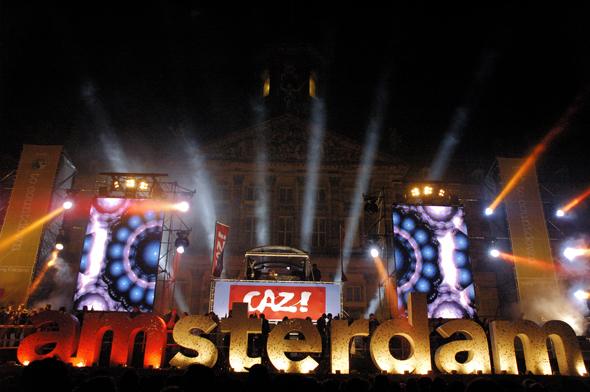 Tired of the same old clubs, seeing the same faces and hearing the same tunes? If you’ve done the Ibiza and Aiya Napa thing and can’t wait for summer,HollandClubbing.com has something fresh and fun for all you hardcore ravers…

When I was offered the trip to Amsterdam, I thought it’d be a great opportunity to escape the tiresome routine of work by relaxing in a coffee shop and indulging in lots of err …coffee. Then I was told I’d be reviewing a club night called F*** Me , I’m Famous. But what the hell, after the past few weeks I’ve had, I thought F*** it, I’m outta here!

Trinny and Susannah
The train from Victoria station was a mere 20 minutes to Gatwick and when I arrived at the airport I bumped into the dodgy-looking style duo, Trinny and Susannah (What Not To Wear) who looked like they were well in need of a break themselves! I began looking forward to an interesting weekend.

With the duration of the flight being an hour – an advantage over the four hours (plus costs) it’d take you to fly to one of the Balearic Islands – it wasn’t long before I arrived at Amsterdam Airport (Schiphol). I was greeted by Erica from HollandClubbing.com and met with the other journalists to hop on a train as the station is within the airport. Transportation is more reliable than in London – it’s clean and comfortable too – but you could walk anywhere you want to as everything is so close. Affordable accommodation
Accommodation is abundant in the city centre, including the Budget Hostels and House Boats. If you’re looking to treat yourself, the newly refurbished Renaissance Amsterdam hotel is highly recommended. Although sporting a four-star rating, the tasteful décor and professional staff are second to none. The rooms are clean and spacious with all the basics provided, and besides my own, the bed was the most comfortable I’ve ever slept on. Another selling point is its perfect location – convenient for all the main attractions and being situated next to the ‘gracht’ (canal) makes for a romantic setting.

Food for thought
In preparation for the long night of clubbing ahead we were taken to an exquisite high-end restaurant. Following suit of our celebrity-styled weekend, the stylish Nomads restaurant (named after the Bedoin wanderers of the Arab countries) is a ‘see-and be-seen’ venue without the pretentiousness where you dine without shoes on comfortable sofas partitioned off for privacy. It felt as though we were in a club with an in-house DJ, belly dancer and lots of interaction between courses including Tarot Card readings and a stress-busting masseuse – I had a full-body massage (clothes on!) for 15 Euros.

Ready for bed?
By the time we arrived at the Heineken Music Hall I felt as though I was ready for bed, but as soon as we walked in, the music and buzzing atmosphere soon woke me up! I had arrived at the notorious, F**k Me, I’m Famous hosted by internationally acclaimed dance DJ/producer David Guetta. The place was jam-packed with clubgoers and the stage setting was amazing. The highlight of the show, for me, however was DJ Chuckie’s set. It soon turned out to be a night to remember.

Suriname Chuckie
Originally from Suriname, Chuckie has become one of Holland’s most respected dance DJs. His love of all genres of music really comes through during his brilliant performance and has earned him the rightful title of ‘The Mixing King’. His sets include mixing hip hop anthems with House music which creates such an eclectic fusion you can’t help but dance. Already a household name in Holland with nights ‘Dirty Dutch’, Chuckie is steadily becoming an international star and received his first award for Best Urban DJ at the UK’s very own MOBOs in 2004.