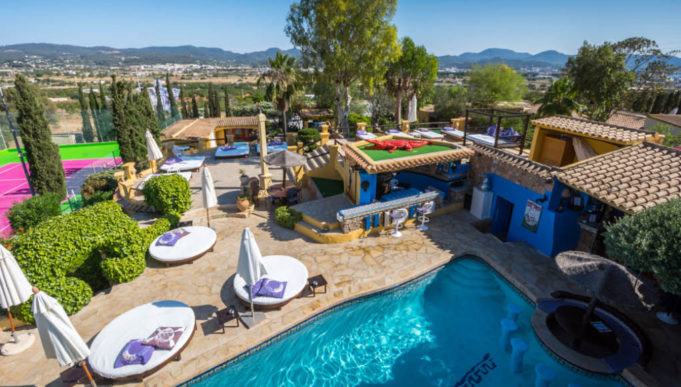 Pikes Hotel is one of the biggest jewels in Ibiza’s glittering crown and one of the few remaining rock’n’roll hotels in the world that is genuinely steeped in legendary musical history.

Set in a beautiful rambling 500 year-old finca this award-winning 25-room boutique haven, hidden in the sun drenched hills of San Antonio truly represents the original bohemian spirit of Ibiza and is firmly established on the map as Ibiza’s number one Go-To cultural hub.

Listed as one of the ‘Top 100 Hotels in the world’ by Sunday Times Travel and winner of ‘Best Boutique Hotel’ by the prestigious White Ibiza Awards for three years running, Pikes hotel is an iconic Ibizan institution, set around sprawling fairytale gardens with a famous aquamarine pool (the location for Wham’s ‘Club Tropicana’ video).

Lovingly restored by Andy McKay and Dawn Hindle founders of the world-famous Ibiza Rocks brand in 2011 and adored by locals, Pikes is one of the few places that still represents the authentic, carefree, Balearic spirit of the island combined with an up to the minute new-wave of edgy millennial style.

The hotel was originally created in the late 1970’s by the legendary Tony Pike (now in his 80’s and still resident at the hotel and can tell a story or two). For the last few decades Pikes has been a playground for the music elite with regular guests including artists such as Grace Jones, Spandau Ballet, Bon Jovi, George Michael and Freddie Mercury who held his legendary 41st Birthday Party at the hotel in the infamous

Recent guests have included Naomi Campbell, Kate Moss, Mark Ronson, and Lily Allen and now with sister-brand Ibiza Rocks at the helm, Pikes is home to some of the most exclusive parties in Ibiza every summer with DJ’s in residency including Idris Elba and DJ Harvey (along with bathtub karaoke on tap and a treasure-trove boudoir hosted by the brilliant Sunny Ramzan).

Each season the hotel hosts a series of unique pop-up music, art, food and club events such as Cosmic Pineapple and Melon Bomb as well as being a venue for some of the world’s most exclusive private parties and weddings. Head chef Lee Milne who has worked at award-winning restaurants including ‘Restaurant Gordon Ramsay’ and ‘The Vineyard at Stockcross’ has established ‘Room 39’ as one of the best restaurants in Ibiza, with daily mouth-watering ‘House specials’ along with an extensive a la carte menu and sublime individually chosen wine list.  Pikes is also famous for the weekly  ‘Sunday Roast’ and for it’s pop-up London restaurants such as visiting chef Richard Turner from Hawksmoor throughout the season. And if you’re feeling sporty there’s a hot pink tennis court, whirlpool tub, and a variety of massages, fitness and yoga classes offered in the ‘Rockovery’ tent day to night.

There are 25 comfortable and spacious rooms at Pikes, ranging from doubles and junior suites to La Residencia, with walls hung with stunning photographic images by Victor Spinelli and other artists. Each room has a whimsical character and rustic Balearic feel, with décor that gives a nod to the hotel’s rock’n’roll roots with added extras such as one room with a vintage record player or a sunken bathtub inside another. The rooms are dotted around the property, linked by a web of paths and gardens where you might spot a snoozing cat poolside.