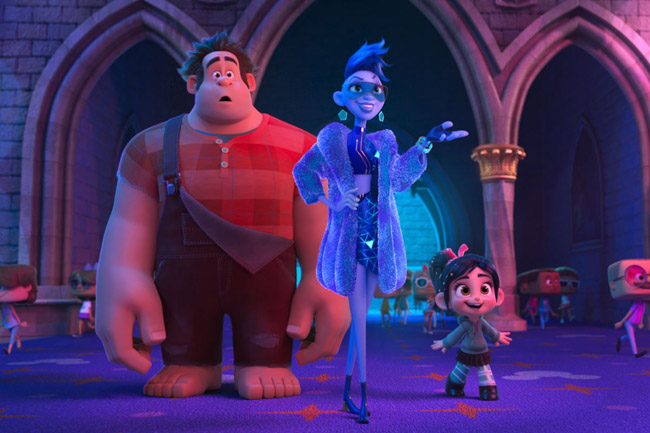 Five years after Ralph wrecked all animations in its path, Disney has returned the muscular meathead head and his best friend Vanellope for an overstuffed exploration inside the internet with smile-inducing humour and heart with a dash of social relevance.

John C. Reilly returns as the voice of bad-guy turned good, Ralph, along with Sarah Silverman’s Vanellope. Where Ralph is happy to spend his days repeating the same game path in the arcade, Vanellope is getting a little bored with the same three tracks her Sugar Rush game provides. She longs for more adventure with her big dreams. On the quest for a new steering wheel for Sugar Rush after the old one is broken, the best friends venture inside the internet on the hunt for a new one, but this new world promises big dreams and threatens friendships.

Just like the World Wide Web, the animation serves up a world of fast-moving content flying at you thick and fast. Tiny animated people representing the humans on the outside fly around the internet in cube boxes on the way to their desired destination. Social Networking sites like Facebook, Instagram and Snapchat and search engines are represented by districts, billboards and buildings, while tweets are shown as birds tweeting notes on tree branches. The only place the pixel friends can find a new wheel is on eBay, with the help of the overzealous auto-predicting search-engine, Knowsmore, the pair arrives at eBay but soon find out they need actual money to buy the item.

Just like reality, the friends navigate the endless money-making pop-up’s making new friends and acquaintances. Whilst Ralph is taken under the wing of BuzzTube’s algorithm, Yess (Taraji P. Henson), Vanellope has her head turned by Shank (Gal Gadot), the head character in a thrilling car chase game that offers her on the edge of your seat action. The core of the film is about friendships and as Shank points out to Vanellope, “Best Friends don’t have to have the same dreams” but this causes Ralph to feel insecure unleashing all kinds of hell on the stability of the net. There is a message here both adults and kids alike could learn, it may be hard to let your nearest and dearest pursue avenues that don’t include you but you have to let them fly.

With an endless stream of cameos, Disney takes the opportunity to not only point the finger of fun at themselves but open up a box of Disney princesses and engages in smashing the very same stereotypes they previously created about woman. Vanellope gets her own Disney princess moment but not before she gets to break them first by influencing their fashion choices and hilariously turning them into “strong men” saving heroines.

It’s a triumphant return for Ralph but there is so much to take in with this sequel that it may just need more than one viewing to spot the relevant content. Whilst the witty references and content connect with the adults, it most certainly proves foreign code to its intended younger audience.