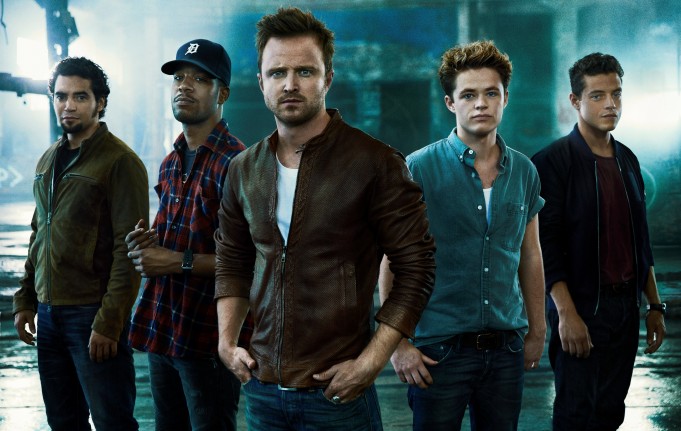 With this current crop of young actors plying their trade, thirty three year old Rami Malek is certainly a name making a powerful stand as one of the brightest stars. Born in Los Angeles his cv already has an enviable list of names like Steven Spielberg, Tom Hanks and Sir Ben Kingsley. This year Rami features on the hot to death, all action, eye candy laden, sex on wheels, Need For Speed adapted from the hugely popular game.

In the film which centres around the character (played by Aaron Paul) Tobey Marshall’s attempts to clear his name of a crime he did not commit (why do these numskulls always go for the wrong person hey)-Rami plays the love or hate character of the sarcastic Finn.

Flavour got some time to talk Rami about such important issues as –who was the hottest bit of eye candy on the the smash Need For Speed?

Let’s talk about the premiere. You said on your twitter it was amazing what made it different from other premieres?

The amazing thing about it was it took place at the iconic Mann’s Chinese Theatre at Hollywood. You know there is always a red carpet for these events but they got a red carpet that covered the whole boulevard so we were not only walking along the boulevard when were also driving on the red carpet-it was breath taking.

There are some similarities with that other great car movie franchise Fast and Furious but what makes this film different do you think?

It is an action movie but at its heart it a story about loyalty and revenge and it can be very dark and dramatic at moments. This film was unique because of the danger in all of the stunts we were doing practically which is what set us apart really. The lack of CGI and the genre which is a throwback to great films from the 70’s like Bullitt (1968) and Cannon Ball Run (1981) that really differentiated us from the others films.

I have to say I fell in love with Imogen Poots she is special she has something that not a lot of these actresses in Hollywood have.

Would you chill with your character Finn?

My character can be very smarmy and a sarcastic his name is Finn.  He does some really fun and obnoxious things in the movie so you kind of like him or hate him there is no in between. I think I would enjoy him as a friend because of his unpredictability.

Let’s talk cars because the array of brilliant-did you get a chance behind the wheel of the Buggatti Veyron?

It is hard when you are shooting to enjoy the wide array of cars from some great European cars all the way through to some great American classic cars. Any chance we got however we would duck off in these amazing machines. The Buggati Veyron is an amazing vehicle which I did not get a chance to drive which is a shame because it is now in a million pieces. Maybe if we have a sequel the chance will come.

What was your most dangerous stunt you had to take part in?

The most dangerous thing I did was getting on top of a moving truck while refuelling Aaron Paul’s Mustang while racing across the country-we call the truck we call it the ‘hot fuel’. We were doing that all day (of course it is not done in one take) so doing that repeatedly while trying to fuel the car was a challenge but an exhilarating one.

What about eye candy who was your favourite?

I have to say I fell in love with Imogen Poots she is special she has something that not a lot of these actresses who run around Hollywood do not have. Aside from that twinkle in the eye, she is really gifted as an actress and of course she is very nice to look at.

What other projects do you have coming up?

Well we just finished the Night At The Museum: Secret Of The Tomb (2014). It was a unique experience because we get to shoot in London at the British Museum but it was special for me because Sir Ben Kingsley plays my father.  I also have a film I did with Spike Lee film called the Da Sweet Blood Of Jesus which is an indie film that was an incredible experience.  He is an icon and a visionary and he has created amazing films like Do The Right Thing (1989) so just being around him I was able to learn a lot from him.