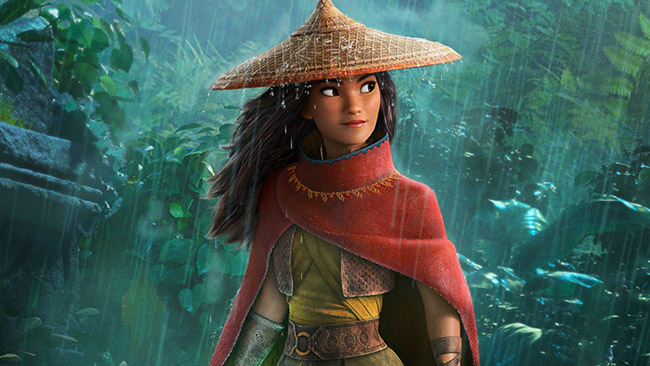 Disney, once again, wins on the diversity and originality stakes. This time, in Raya and the Last Dragon, the house of mouse bangs home the message – without a sledgehammer – of hope and unity to bring about a better world but not without a few bumps in the road to give it that reality factor. Let’s face it, in a fragmented world where hate, adversity and self-interest threaten to destroy the world we live in, we could all take a leaf out of the Disney handbook.

Set in the fictional and divided Kumandra, the story begins with Raya’s (Kelly Marie Tran) father wanting to unite and bring peace between the warring factions of the land, but with greed and self-interest bubbling on the surface, peace soon turns to treachery resulting in disastrous repercussions and the loss of half the islands population.

Fast forward a number of years, we find a teenage Raya on a quest to find all the broken fragments of a magical orb. Let’s rewind, Once upon a time both Dragons and human’s lived harmoniously alongside each other but when the dreaded Drunn – an evil whirlwind of dark matter – entered the land it turned everyone, including the Dragon’s, to stone. Those who were saved were kept alive by one god-like but a my little pony looking dragon Sisu (Awkwafina) who unleashed the power of this orb keeping the Drunn well and truly at bay. Back to the story, on her quest to find the fragments to bring back those incased in stone, Raya encounters and teams up with the mythical Sisu and a few others across the land, including the cutest con-baby and her furry friends.

Directors Don Hall and Carlos López Estrada and Crazy Rich Asians screenwriter Adele Lim and playwright Qui Nguyen create a vibrant and magical world to simply get lost in, whilst the plot may be somewhat generic at times, the Asian flavours cause a tingling sensation of freshness to truly lose yourself in the world of pure imagination; Team that with the comedy hopeful silliness of Awkwafina’s Sisu as the sidekick to Raya’s fierce fighting force, we have a winning team of voice actors bringing the action to delectable life.

Filled to the brim with an excellent Asian-American voice cast that also includes Sandra Oh, Gemma Chan and Daniel Dae Kim, you’re guaranteed to feel all the feels, especially as we gallop towards an end that delivers a colourful burst of heartfelt, one we have come to expect from the mushy vibes of a Disney animation.