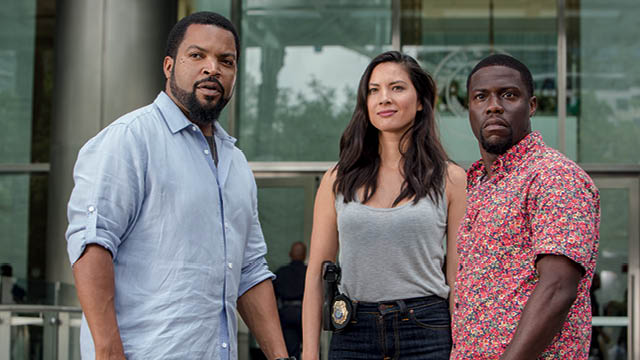 What’s it like joining the world of Ride Along?

Olivia Munn: It was so much fun for us. The first movie was such a success and being in the second one you really know why. There’s such great chemistry between these guys on and off the screen. And when we came in as ‘the new guys’, it didn’t feel like that at all. They were just so welcoming and it was so much fun – even though I ruined most takes with my uncontrolled laughter! This guy here [Ken Jeong] would be one of the reasons for that and the other one would be Kevin Hart. Those two guys made me ruin 90% of what I was on set to do!

Can we look forward to seeing some of that on the DVD?

Ken Jeong: (Laughs) Also on the DVD you’ll see me laughing too. We’re both known to laugh a lot on sets. We giggle and break [character], so…

OM: We both have that horrible thing where once we start, we can’t stop. Watching Ken doing everything he can not to laugh just makes me laugh harder.

What’s it like working with Ice Cube and Kevin Hart? What is it about the combination of the two of them on screen that works so well?

OM: I think they have a true brotherly relationship. And you know, Cube plays the straight man so well. Playing a straight man in comedy is so integral to the scene being funny. People don’t always realize that. When you’re the straight man, you’re basically standing in for the audience, watching somebody being so crazy and out there.

KJ: If you don’t have a good straight man or an actor that can help ground the scene it’s impossible to have a good scene. Both elements are so important. And I’m always grateful when you have really great actors like Cube, Olivia, and even Benjamin Bratt, to help ground these scenes and set the tone. If the playground isn’t built right, you can’t have fun in the sand.

OM: And also, Ken doesn’t feel comfortable on set unless people are averting their eyes. He doesn’t like eye contact from anybody.

What was it like shooting in Miami? The city itself is almost another character in the film.

OM: That’s a green-screen. It cost $10 million to create (laughs). No, it was fun. You know the energy and life here is just infectious. Work doesn’t feel like work here.

KJ: Miami is such an integral character to Ride Along 2. And it’s so great to soak it in and to have Tim Story and Will Packer (director and producer) just really capture the landscape and feel of it. What I love about the movie is that you feel the presence of Miami so much in it.

What was it like watching the film with an audience for the first time here at the premiere?

OM: I don’t normally like to watch myself. I wouldn’t have done it, but I knew the cast was there with me, so I was like ‘Okay…’ And it was actually so much fun because every time the audience laughed was a time that I was laughing on set when we filmed it. It was a confirmation that what we had done on set was there on screen.

Ride Along 2 is available on Digital HD now, and on Blu-ray and DVD from 30th May.