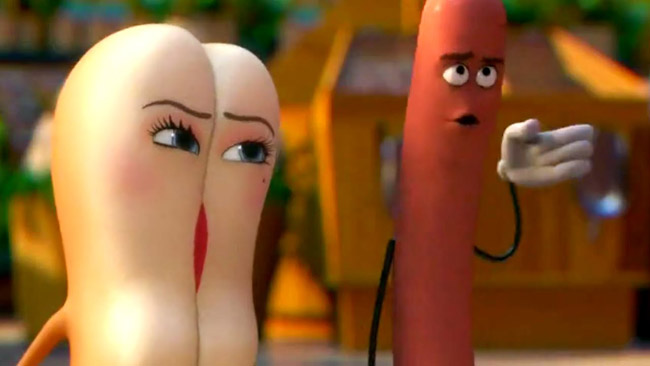 There’s one thing of high importance worth noting about Sausage Party, this food based animation is in no way suitable for any child under the age of 13, Sexual innuendos, pot smoking perishables and with every other word practically being an expletive, certainly see’s this overstepping the boundaries in leaps and bounds.

Cleverly written by Seth Rogen as well as Evan Goldberg, Kyle Hunter, and Ariel Shaffir, Sausage Party has many underlying themes, ones in which no one is safe. Full of non pc racial bigotry, dealing with sexuality on both sides of the fence and the all-important (to some) question of religion which begs to ask if you have no proof that the almighty gods mean good why is it hard to believe that the gods are murderous human beings? Is there any point trying to convince the blind of something they don’t want to see? Our setting is a giant Supermarket, housing foods from around the world all living harmoniously (kind off) under one roof, Starting off each morning with a song and dance number excited for the day ahead in hope that they are chosen to venture to the Great Beyond by the gods. Our horny yet playfully charming Sausage Frank (voiced by Seth Rogen) has the major horn for a curvy bun named Brenda (Kirsten Wiig), both hoping one day they are chosen together. However, when a jar of Honey Mustard is returned he brings tales of horror from the Great Beyond which starts the decline in the belief of their existence.

Scattered throughout are scenes of total jaw dropping amazement as we witness an almost Saving Private Ryan moment when an accident see’s the food spilling out onto the floors. Flour clouds filling the air and smashed bottles of jam bringing the peanut butter to his knees’ for the loss of his wife are all rather effective and totally horrifying.  Frank and Brenda, having been involved in that scene find themselves out of the shopping trolley and in a race to find their way back to their packaging but it’s their journey through the supermarket which opens their eyes to a wider world. They are joined by a Woody Allen-esqe Bagel (Edward Norton) and an Arabic lavash all whilst trying to escape the evil clutches of a vaginal douche which is dying for a hole to fill.