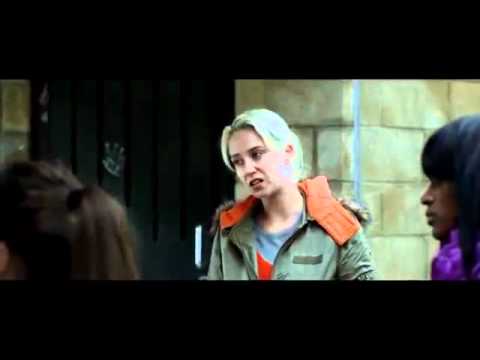 So what is a Sket? In a nutshell it’s the urban slang for a promiscuous woman or a hoe who sleeps around. The film tells the story of Kayla (Aimee Kelly) a young 16 year-old-girl from Newcastle who lives with her elder sister in an urban inner city estate. She is not a sket and to be honest none of the women portrayed in this film actually are so the title is a bit misleading. However this does not take away from good story looking at why girls may join and stay with a gang for support, companionship and to camouflage their insecurities.

The films writer/director Nirpal Bhogal has done a really good portrayal of Kayla who comes across as all alone helpless and a little bit intimated by her surroundings, but then transforms into a strong powerful young woman who takes control of her life or at least attempts too. It all starts when Kayla comes across a group of girls (gang) on a bus one day. The gang led by Danielle (Emma Hartley-Miller), who hates men, intervene (physically) and stop two boys from harassing Kayla. They get off the bus and go on their merry way but now Kayla is intrigued and anxious to be part of the group and follows them to thank them and ask to hang out with them. I think this is what makes this film intriguing, why would you want to be part of a gang? Who are the types of people that are in gangs? And are gangs really that bad if they look out for each other? Well you won’t find all the answers to those questions in this film but at least it makes you wonder or give it some thought. I digress; let’s get back to the juicy bit of the film. After an initiation of stealing some money from a newsagents and later beating up a boy who has physically violated one of the girl gang members, Kayla is now part of the gang.

The dramatic turn comes when Kayla’s sister is needlessly killed by Tre (Ashley Walters), after she tries to stop him beating up his girlfriend Shaks (Riann Steele). This is the point where the three main characters Kayla, Danielle and Shaks paths all collide. It must be said that Shaks at this point really does stand out as the female character that captures the screen with real authority. Boyfriend of a drug dealer and ex junkie, she struggles with how her life and world is and after informing Tre she is pregnant and he tells her to “get rid” she is seeking a way out of this self-destructive lifestyle. You are not just attracted to her character because she is beautiful and sexy she actually has a Thandie Newton (Mission Impossible/Pursuit of Happiness) type quality, you can see that Hollywood blockbusters awaits her.

Sorry, where was I? So Kayla goes to Danielle for support and help in getting revenge for her sisters death. In the meantime Tre is after her to finish all loose ends so nothing comes back to him. She ends up sleeping rough on the streets after she is attacked in her flat and all seems hopeless. Until she bumps into Shaks, who decides that maybe it would be in all of their best interests if Tre was taken care of. With the help of Danielle, who also hates Shaks, they decide to hatch a plan for Kayla to take care of Tre at a warehouse party he is having in East London that Friday night. Now this may all seem a little confusing, but it’s not. The film moves at a steady pace, has very few characters to follow and the plot and dialogue is pretty simple and doesn’t glorify gang life in anyway. What makes this a good movie to watch is the performance and delivery of the three main female characters Kayla, Danielle and Shaks, if not ground breaking or Oscar winning, it is most definitively moving.

This film is by the same company that gave you Anuvahood (Adam Deacon) and Shanks (Bashy), so if you like urban scenery, grey skies, simple storylines with ok dialogue, then this film would be right up your street. If you don’t well it still worth giving it an hour or so of your time, if for nothing else but to see Kayla (Aimee Kelly) in her first feature film and potentially future star of the big screen Shaks (Riann Steele).