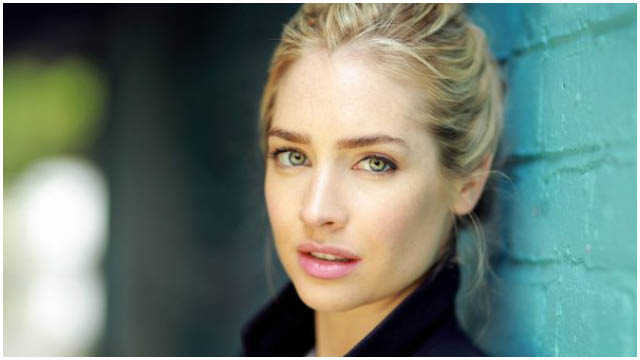 Sophie Colquhoun is the British, blonde beauty who we have seen in Captain America, Plebs, The Royals And The Inbetweeners. Sophie Colquhoun has also appeared in the very popular UK comedy Phone Shop. Series 2, episode 5 to be precise. The “Come Dine With Me” episode. We always find it funny when someone so beautiful manages to go under the radar and sneak through the ranks slowly but surely. Sophie Colquhoun has featured in many a comedy and although she isn’t a comedian, Sophie Colquhoun plays her comedy roles so well. In plebs Sophie Colquhoun was the naive bombshell searching for an actress career in olden day Rome with co-star Lydia Rose Bewley. In phone shop Sophie was the daughter of a white man that wanted to be affiliated with Jamaican culture, he spoke, walked and acted as if he was a Jamaican which was literally hilarious and embarrassing for any daughter. In the Royal’s she is the air to the throne’s ex-girlfriend, her opening scene saw Sophie wearing a sultry lace slip and reminding the prince exactly what he is missing out on.

Her dress sense is exquisite, we can literally picture Sophie wearing a beautiful coast dress or a stunning Reiss dress and judging from the video above, she probably shops for lingerie at Agent Provocateur.

And there’s more if you know your TV and your TV stars you will have also seen Sophie Colquhoun in BBC’s E20, the spin-off to EastEnders which see 3 teens journey as they try to survive in Walford. Let’s take a quick look at Sophie Colquhoun’s Instagram account, unfortunately for some of us girls and boys, Sophie doesn’t pop that many saucy pics… However, we have found a few golden nuggets to get you all excited.

2. Leave your comments below if you think Sophie would be a great kisser. We do.

3. Such a stunner, I bet you wish your girlfriend looked like this?

4. Did she just say come frolic with us?

5. In a Zombie Apocalypse Sophie would still look hot.