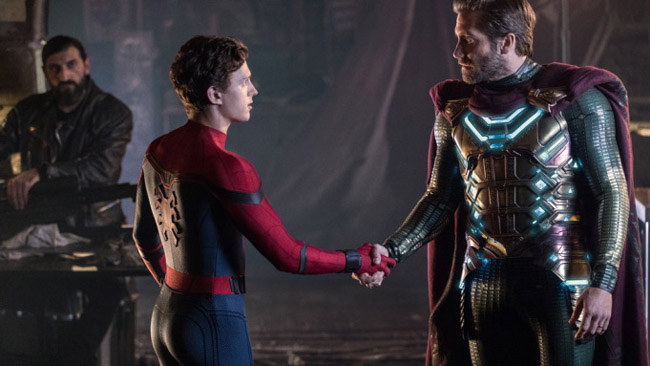 Breezy and light-hearted with some epic action pieces, it’s a visual kaleidoscope that will send ‘Peter Tingles’ down your spine.

Avengers: Endgame may seem like it has only just come and gone, closing out the infinity saga but Tom Holland’s Peter Parker aka Spider-man is back to tie up a few loose ends and mourn the passing of his mentor and Father figure in a CGI disaster fest that is a visual kaleidoscope creating your very own ‘Peter tingle’.

Set after Endgame, where those lost to Thanos snap have returned, the world, for now, is in the middle of a peaceful time. Peter having returned from said snap is back at school with his friends and looking forward to a summer break travelling around Europe on a school trip. Consumed with his grief at the loss of his Avenger’s mentor, Peter just wants to relax and let his hormones take over with a planned romantic declaration for MJ (Zendaya) once the group hit Paris.

But if you are an Avenger, nothing ever goes according to plan and thanks to Nick Fury (Samuel L. Jackson) who hijacks his holiday, his services are called upon once more.  With most of the other Avengers off-planet or taking a well-earned break, it’s down to Peter to team up with a new ‘superhero’ Mysterio aka Quentin Beck (Jake Gyllenhaal) to take down the Elementals, a new foe that cause untold damage to world-famous landmarks across Europe.

Returning director Jon Watts and screenwriters Chris McKenna and Erik Sommers bring the same breezy light-hearted tone they created with Homecoming but with added visual avant-garde CGI disaster movie flare but it never vies far from the plotlines that made the first such a huge success.  The action comes thick and fast with crumbling buildings caught in the crossfire of swirling giant water and fire elementals in which a goldfish bowl helmeted Beck battles with acrobatic ferocity and prismatic and psychedelic imagery.

There are some tender moments amongst the mayhem as Peter struggles with his grief over the late Tony Stark, from a touching opening sequence in which a video collage pays tribute to the fallen or retired avengers set to Whitney Houston’s ‘I Will Always Love You’, which is more hilarious than tear-jerking, to a giant graffiti memorial of Iron-Man on the side of a building, it’s clear that Peter is feeling overwhelmed by the possible inclination that he has to follow in the footsteps of Stark but does he feel worthy enough of that huge responsibility?

Of all the actors that have come before in the role of Peter Parker, Holland really does make this his own and is by far the best. Once the suit is on, that loveable cheekiness comes so naturally but once the mask is off his awkward vulnerability engulfs the very character. The awkwardness around his feelings for MJ is classic teenage angst but he nail’s it further when Aunt May (Marisa Tomei) gets her own taste of romance.

There are so many jubilantly fun moments all wrapped up in an action-packed memoriam of a fan-pleasing box of chocolates, it’s hard to find something not to love about the latest Spidey adventure. Can Marvel rely on Spider-Man to lead the next phase of the MCU just as Iron-Man did for the Infinity Saga? I’m certainly making a trip to the bookies to put some money on it.

Spider-Man: Far From Home is out in cinemas July 2nd.