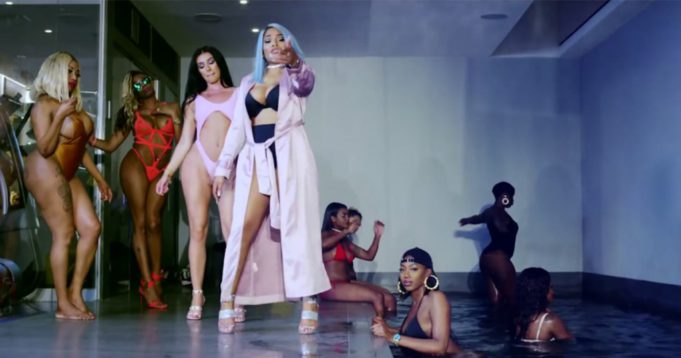 For those of you that don’t know about Stefflon Don, you need to wake up and smell the coffee and get to know Stefflon Don.

Stefflon Don is a rising British star who has already be likened to UK Nicki Minaj. Stefflon Don was born is 1991 and originally hails from Birmingham. Her signature colourful hair styles and super sexy outfits makes her almost unmissable.

In November 2016 Stefflon Don released the official music video for ‘Real Ting’. ‘Real Ting’ is the first track off Stefflon Don’s up-and-coming mixtape and features a whole bag of girls dancing around in everything from bikini’s to swimsuits to hot pants and tights.

The music video is so hot that, man like Giggs jumped on the remix and believe me, if I was a rapper I would be jumping on the remix too.

Speaking of Giggs, you may remember our article called ‘Who are the real bad boys of the UK rap scene?‘, If we wrote the female version of this article, Stefflon Don would probably come out on top.

Watch the videos above and you’ll see why the question on everyone lips is Who are the girls in the music videos?

First up is Stefflon Don, who isn’t afraid to post salacious bootylicious photos in her insta

Next up is Erin Budina who features heavily in the videos. Erin Budina gets more seconds on camera than any other girl and if you take a look at her instagram you will see why.

Singer-songwriter Monique Laws also made an appearance in the video. She’s gorgeous

I’d happily give her the keys to my bimmer, its Sim Simma

I also noticed Princess Peaches and now all I’m thinking about is what to do with all that chocolate?

I could be mistaken, but I think Orienne Brown made an appearance too.

And finally, I think nearly all of the La Familia dolls made an appearance too