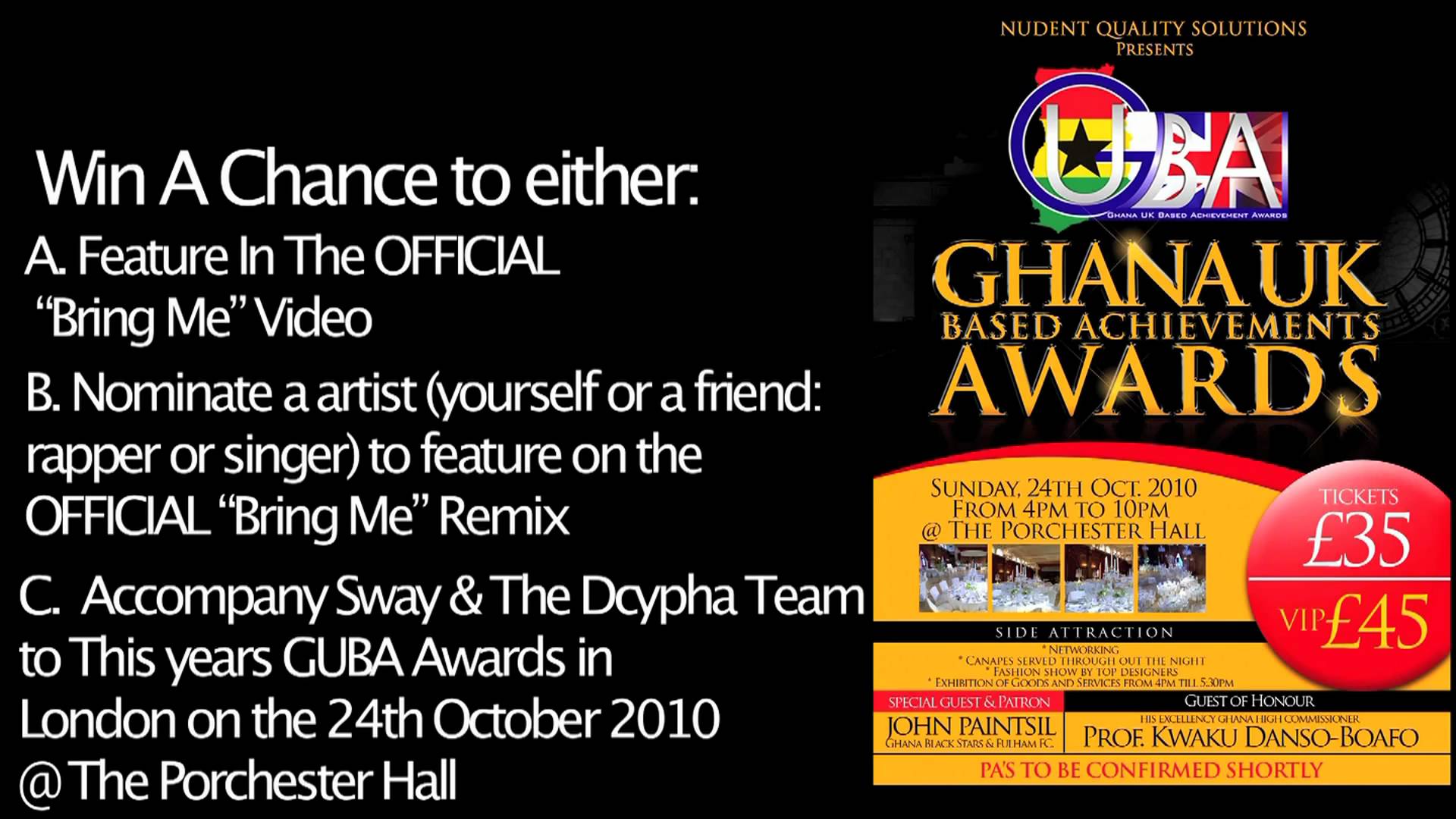 The Independent described his 2006 album This Is My Demo as ‘not just the best British rap albums in years, but simply the best rap album in years, full stop’. He has collaborated with pinnacles of the music world, such as Akon, Lemar, Craig David, Lupe Fiasco, Chamillionaire, Ian Brown, Ali Campbell and Jamelia, to name a few.

To date, he has received 12 major awards, including three Urban Music Awards and a BET Award; plus he’s sold more than 100,000 albums and released seven mixtapes. The Delivery is his most recent, paving the way for his long-awaited third studio album The Deliverance, labelled by The Times as ‘a mixtape of album standards’, getting more than 10,000 downloads in the first week. Sway is back and better then ever, as Flavour finds out. It’s been a while since we’ve seen you, what have you been up to?
Just working hard: released a few mixtapes last year; working hard on the collaborations circuit, doing collaborations with loads of different people; just maintaining a relevant buzz out there on the underground, whilst working on my album The Deliverance, which is gonna hit the stores around September.

You’ve been away a while – what made you decide now’s a good time for a comeback?
I’ve always been here, you know what I mean? I’ve always been under people’s noses. But music is a journey, it’s not something that’s around in the full front all the time. You have to give yourself space to recreate and come back again, cos if I was constantly in people’s faces from when I first came out in 2004, then everybody would be sick of me. There’s gotta be a time when you release an album; then during the time I haven’t released anything in the UK, I’ve released an album in Australia and Japan, and toured all around Africa. So, just learning new experiences, getting new influences I can bring back to my UK fan base.

Some people have this weird notion I linked up with Konvict, that I got a bit of money and thought I’m gonna go to Ghana and chill in a mansion [laughs]. It’s not like that, I’ve been constantly working, constantly grinding – the proof is in the pudding, you might say. I got a lot of new material, my feature game’s been crazy, am on every mixtape out there out of the love I have for music. So yeah, I’ve been here.

You feature on two new songs out – ‘Shopaholic’ and ‘This is the life’. Tell us a bit more about them.
‘This is the Life’ was a song brought to me by a producer called Del Still and I really liked the vibe of it, man; it’s feelgood music and I wanted to do the song for some fun. But then people started liking it; they ended up putting a video behind it, and the video’s out there now, doing its rounds and starting to promote it, which is great. At the same time, I got a collaboration with McLean and Wideboys called ‘Shopaholic’, a song I did about a year and a half ago. I put McLean on it recently because I wanted a new swing on it, to take it somewhere else, and that’s out there right now as well. I love both tracks.

There are a lot of grime/hip-hop artists out there, but you always seem to bring a different vibe – how important is it to you that you remain original and not cliché?
Well, it’s called a cliché for a reason. At the end of the day, when you’re true to yourself and true to your influences, you’re gonna be original. The amount of different music I listen to and the amount of people from different walks of life I talk to and the places I’ve travelled, I’ve just always got my eyes and ears open for new things for that reason – so I can be different. I am always gonna be different because I draw inspiration from where people can’t go – but Sway can and that’s always gonna set me aside from everybody else.

Your music touches a lot on relationships – any reason?
I like to make music people can relate to. I don’t wanna rap about Mars, because I’ve never been there; I don’t know what’s going on in that place and Jupiter and the stars like some rappers do [laughs]… but I do know about your ex, I do know about guys phoning me up because I’ve exchanged numbers with their girlfriends and didn’t know they had a boyfriend [laughs]. I rap about stuff like that, stuff that happens to me; sometimes I exaggerate, sometimes it’s true to the story or sometimes it’s an experience one of my friends has gone through. It’s all about relating, I like to do that with my music.

Where’s the most interesting country you’ve performed in?
It would have to be Sierra Leone. The reason I say Sierra Leone is because it’s obviously a war-torn country, so I had heard a lot of things about it in relation to that; but when you go there and you see the place, it’s one of the most beautiful countries I’ve ever been to. Landscape-wise, the beaches, just the atmosphere; the people were really receptive, open and welcoming. It was a special place for me to be at.

What can we expect from your new album?
My new album is designed to be uplifting and motivational. I’ve been through a lot of ups and downs in my life and also in my career. I’ve made good decisions, I’ve made bad decisions, but I stick by every decision cos I made them consciously. As a human being you make some mistakes, but you learn from them as well. So the album is called The Deliverance because there’s so much inside me I wanna get out, and that’s what this is about.

How did it feel when you won a BET Award?
It was great – I didn’t really see the value of it in the beginning because I was the first one here to win it, so I didn’t know what it really meant. But then it was crazy. We’d be in places like Atlanta and I’d get recognised by people, or in Texas and get real-life cowboys coming up to me, [puts on a southern American accent] ‘Don’t I know you from somewhere?’ [Laughs] I am used to that here, but not over there. It’s a cool thing.

How was it working with Akon?
To be endorsed and co-signed by Akon is a great thing because he’s opened a lot of doors for me. Just working with him and having that affiliation with such a global international artist has opened a lot of doors for me, definitely. I’ve got fans hitting me up from all over the world, China, Japan, Australia… not just because of the affiliation with Akon, but that helped a great deal. I can only thank him for recognising the talent, but he’s not the person who’s gonna say, ‘OK, am gonna stop my career to focus on Sway or take Sway to the next level.’ No, Sway has to focus on Sway. That’s what’s important. Akon took Akon to the next level, so Sway has to take Sway to the next level. Definitely been a great adventure and we’re a family. He’s also on the new album.

Does your culture and background influence your music?
Being a West African, being a Ghanaian, that’s heavily influenced my music. I don’t even know how it happens because I used to live there when I was so young, but even the accent slips out sometimes [laughs], sometimes in everyday speech, sometimes in my raps. I guess my culture is so heavily embedded in me, it slips out but yeah man I love Ghana, and I love Africa and am always gonna rep that in my music.