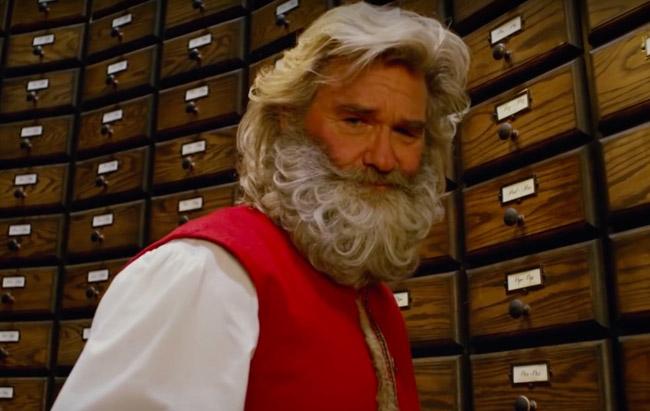 Christmas is well and truly on its way…. if you weren’t aware, Netflix will certainly remind you with the slurry of festive fare. Whilst, most are slushy mush that doesn’t even have the energy to entertain your lazy Sunday afternoons, its latest unwittingly Sexy Santa Kurt Russell is about to shake up your dull ol’ sprouts.

The story centres on a young family, having lost their firefighter, Father, Mum Claire (Kimberly Williams-Paisley) relies heavily on the moody, teenage son Teddy (Judah Lewis) to look after younger sister Kate (Darby Camp) whilst she works the nightshifts down at the hospital. Teddy is angst-ridden at the loss of his Father and tries to act out as the sugar-coated bad boy, hanging around a bad crowd and stealing cars. Kate is still young enough to be a believer in Santa and comes up with a hair-brained scheme to catch good ol’ St Nick in action and bribes Teddy to be her wingman.

After hijacking Santa’s sleigh, disaster strikes and Teddy, Kate and Santa have to work together to get Christmas back on track before the sunrises. It’s a race against time with a number of scenes that see Russell own this new breed of Santa. He knows if you’ve been bad or good but he is far from the sickly sweet, heart-melting jolly rotund St we are lead to believe. Instead, the job seems to have given him an air of sarcasm and an aptitude to break a few of his own rules as he speeds around town in a stolen car looking for his escaped Reindeers. His crowning glory sees him do his best Elvis impersonation with a good ol’ Jailhouse Rock.

The Christmas Chronicles comes from the prince of Christmas himself, Chris Columbus. The man behind Home Alone and Gremlins hasn’t directed here but has a producer credit; however his stamp of festive frivolity and wit is laced in every scene. Even Santa’s Elves comes from the same family tree as Columbus’s Gremlins, cutesy one minute but by lord, you don’t want to get on the wrong side of these ninja devils.

The story isn’t anything out of the extraordinary, far from it; it’s your typical paint by numbers disastrous Christmas adventure. If it wasn’t for Russell’s feisty, no-nonsense, risk-taking Santa you’d be asleep within the first 10 minutes as the kids responsible for almost ruining Christmas go about their frantic adventure trying to right their wrongs. Russell makes this film the bag of festive escapist fun we all need to get drunk on this Christmas.