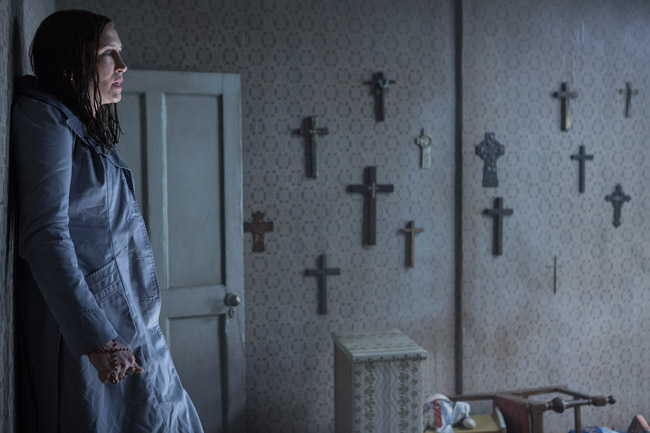 Back in 2013, Director James Wan brought us The Conjuring, a horror based on one of the real life stories of renowned demonologists Ed and Lorraine Warren – it had the largest opening for an original horror movie and has been one of the highest grossing horror films to date next to The Exorcist.

2016 see’s Wan deliver us a sequel, The Conjuring 2, to this highly successful offering with its leading cast of Patrick Wilson and Vera Farmiga taking up their roles as the Warrens yet again to travel to Enfield to investigate the real life, highly published 1977 haunting involving two young girls. What can we expect? Wan, giving us those creepy, drawn out, and in your face scary moments with high entertainment value and quirky cheesy humour. Ed and Lorraine Warren have taken a long break from their demonic investigations and fighting since their Amityville horror, but as news starts to spread across the world of the Enfield haunting in England, the Warrens are called upon by the church to make that trip to investigate to find out if this case is really a hoax or the real thing. Whilst this is going on Lorraine also has a frightening premonition ‘Something inhuman wants to kill you. If we keep doing this you’re going to die’ she tells Ed, but they make that all important trip.

Over at the Hodgson house in Enfield 10 year old Janet (Madison Wolfe) and the rest of the family are at breaking point as an evil entity strikes fear into their very souls, with the arrival of The Warrens amongst the media frenzy and talk of one big hoax they find that finally there could just be people who believe them and their troubles could soon be over as the pair identify and fight off not just a demonic force but also another spirit who hasn’t been able to pass on. Amongst the extremely well executed jump scares and the build up of dread, Wan has mixed in some quite unexpected humour and a tiny bit of a love story in the development of the Warren Characters; this brings a refreshing feel to a seemingly familiar horror arrangement. They story, even though told numerous ways through TV and Documentaries has been given an almost authentic feel, and having Janet and Margaret Hodgson serving as consultants on the film will have gone a long way in creating that. However, at times, the pacing can be on the slow side and at just over 2 hours long they could have condensed this down by half an hour.

James Wan has been dubbed as the Master of Horror and with this latest offering it’s not hard to see why, he has taken a fairly routine haunted house tale and turned it into one where we actually give a damn about its characters, honed his skills in delivering real jump scares with precision which at times will catch you off guard. Cast performances all round are also believable and Wilson and Farmiga show us a depth to their characters which is rarely ever seen in a horror.

The Conjuring 2: The Enfield Chase is in UK Cinemas June 17