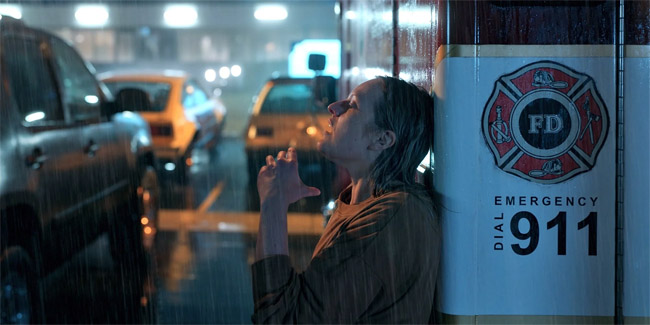 Leigh Whannell kicks off the re-envisioned Monster Universe with a hyper-intense modern-twist on a classic story.

These days it’s not hard to trip over a reimagining, remake or whatever you want to call it at your local cinema.  Universal Pictures are taking advantage of their catalogue of classic monster movies and sprucing them up for modern-day audiences, the latest to hit the big screen after the unmentionable Tom Cruise led The Mummy, is Leigh Whannell’s The Invisible Man, and boy does it pack an almighty punch of intensity.

The adaptation of H.G. Well’s novel, now on its umpteenth version, Whannell has channelled deep male toxicity to its mind manipulation best. Elizabeth Moss plays Cecilia, a desperate woman trying to escape the abusive toxic relationship she has with millionaire optics expert Adrian (Oliver Jackson-Cohen). From its opening sequence, the intensity envelopes the entire scene as Cecilia makes a planned escape while her drugged partner sleeps in the bed beside her.

Cecilia’s escape from hell is a success (just) and she goes into hiding, holed up in the house of her sister’s friend and police officer James (Aldis Hodge) and his daughter (Storm Reid), her state of mind agitated as she fears for her safety, that is until the news comes in that Adrian is dead but Cecilia doesn’t believe the suicide story laid out in front of her.

As strange occurrences start to unfold around her by an unseen hand, those around her begin to believe her mental state is a lot more delicate than they assumed. After one attack in which we witness a throat-slashing by a floating knife in the middle of a restaurant, its straight jacket time for the troubled Cecilia.

It’s hard not to compare its high res gloss to thrillers that shot to fame during the 90s; its opening sequence is reminiscent of Sleeping with the Enemy for one, it offers up imagery that doesn’t particularly give us anything new apart from addressing subjects that are in the forefront of today’s media.  Two main issues arise, one would be a spoiler so unfortunately, I won’t go into that here, but the other comprises of the sheer brute force behind the Invisible Man’s attacks, considering the build of the supposed attacker and some of his victims left me more perplexed than convinced of his power.

Moss runs this show like her literal life depended on it, she gives her character that emotional turmoil of desperation one would assume a mentally and physically abused person would experience. Every passing gut-wrenching moment of her performance brings you closer to wanting to slap those around her for not taking her seriously.

Whannell kicks off the re-envisioned Monster Universe with so much intensity you might think you’re about to explode and Elisabeth Moss is totally badass, don’t be surprised if this offering sprouts a sequel that could take on a gender twist.