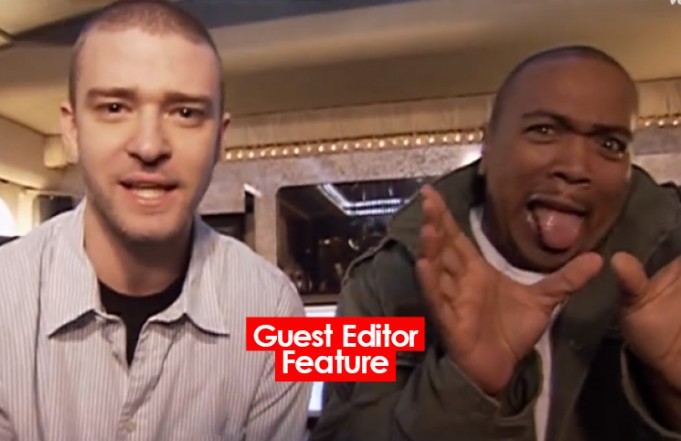 Imagine being one of the greatest producers of your generation. Your music’s loved, the money’s rolling in and you’re recognised as an innovator by your peers. But it’s a behind-the-scenes role and you want the recognition that comes from stardom.

So you add a little rap to the songs – it doesn’t have to be great, just enough to give you an excuse to appear in the videos – but what then? If you want to be remembered you’ve got to have a gimmick. For Timbaland the solution was obvious: pull a face and don’t look back. This rubber-faced titan has gurned his way across a generation’s memories – let’s take a look at some of his most enduring facial expressions. Early Timbaland is serious. He’s just learning the ropes. In Destiny’s Child’s taut Get On The Bus, he appears at the start of the video claiming “I’m just a average man”. But he’s an average man in comedy goggly-eyed glasses. And it’s a portent of things to come. Tim is still quite muted in Aaliyah’s We Need A Resolution, but you have to see it from his side. He’s produced one of the greatest tracks of all time, all slink and sass, and they put him in a room on his own while Aaliyah frolics naked with a big snake. Anyone would be peeved. Peak Timbo-face really kicks off with his 2006 Nelly Furtado collaboration Promiscuous. He sneaked it in really, while the world’s eyes were on Nelly and her unexpectedly sexy reinvention. Here seen mugging into a mobile phone, his reign had properly begun. With his plans for stardom working perfectly, Timbaland was free to start releasing singles under his own name: Nelly and even Justin Timberlake were only the featured artists on his first solo hit, Give It To Me. And the facial floodgates were open. With star billing he was free to let his chops hang loose again, and again. Anything could happen now. Perhaps he knew he’d gone too far though. His follow-up The Way I Are is a spectacular banger, but in the video he’s reduced to flirting solemnly with Keri Hilson in a tunnel. And in Apologize, he can’t compete with Ryan Tedder’s pooing-out-an-egg face and so sits trying to look important in a studio instead. Fully ludicrous Timbaland was back for Elevator but with a melancholy twist. Helping Flo Rida out with a not-so-subtle metaphor about a girl chugging her way up and down a lift shaft, you can catch a hint of resignation in Tim’s eyes. I know this is ridiculous, his silent cry says, but what can I do? And it was only a matter of time before Tim teamed up with Katy Perry, self-appointed princess of the quirky video and no stranger to the wig box. We join him here in If We Ever Meet Again, perhaps contemplating his own mortality.

A Timbaland/Pitbull collaboration was inevitable too. This pair of weirdly sexy but undeniably ageing and lechy stars were made for each other. I like to think this screenshot from Pass At Me captures the delight of a man on the cusp of his 40th birthday who can’t believe he’s still getting away with it.

But it suits us all to recognise our good fortune while we still have it. That fiesta was three years ago guys. Neither of Timbaland’s last two solo singles have been graced with a video, despite being top twenty smashes in Austria. The most recent sighting I have of him is a guest appearance in Karl Wolf’s Magic Hotel. And while Karl gets to sneak around the hotel spying on girls undressing, Tim appears just briefly in a haunted mirror, his powers at an all-time low. Will his glory days of mugging his way through every video in sight ever return? We can only hope.