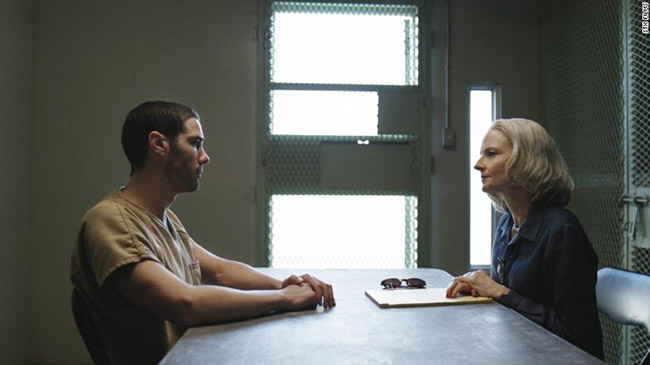 Award-winning filmmaker Kevin Macdonald, best known for ‘The Last King of Scotland’ and the 2018 Whitney Houston documentary ‘Whitney’ returns to the big screen with the real-life story of Guantanamo Bay detainee Mohamedou Ould Salahi. It’s a solid offering with exceptional performances from both Jodie Foster and Tahir Rahim that leaves its audience wanting a retaliation that never arrives.

Based on Salahi’s own New York Times best-selling memoir, ‘Guantánamo Diary’, the film follows the true story of Salahi (Tahar Rahim) who was captured by the U.S. government and imprisoned for 14 years without trial for his supposed involvement in the 9/11 atrocities. With no real evidence, apart from speaking and knowing those that wear allegedly involved, the U.S authorities dragged this man away from his family in Mauritania in north-west Africa and spent years torturing Salahi to within an inch of his life finally getting the false confession they wanted.

Whilst detained, Salahi with nothing but his memories – told through a number of puzzling dream nad disorientating sequences – and a faceless friend in the sectioned off and covered courtyard, finds himself the pet project of lawyer Nancy Hollander (Jodie Foster) who hears about his case, as part of her firm’s yearly pro-bono offering, she decides to represent him with the help of her assistant Teri Duncan (Shailene Woodley). On the other side of the coin, we have Benedict Cumberbatch as the military prosecutor Lt Col Stuart Couch. Couch has his own personal reasons for wanting to see this man brought to justice after losing a friend in the attack.

As both sides delve deeper into the case, facing one redacted document after another, and unearthing the abuse he suffered Hollander is compelled to do right by this man while Couch finds he can no longer support the injustice and lack of rule of law in Salahi’s case.

Objectivity is lacking in this story, being based on Salahi’s own memoir, you shouldn’t really expect it. Yes, the story is one-sided but it still never resolves the questions asked as to whether or not he was truly involved, in fact, surprisingly, even his innocence is something that is left hanging in the air like a bad smell. It seems all this plays out for is to highlight the lack of human rights and physical torment and abuse non-convicted suspects endure at the hands of American ignorance.

Part legal drama, part narrative turmoil, despite its honourable intentions, it never quite finds its truthful voice in the quiet righteousness. Rahim and Foster are exceptionally good in their respective roles; they kind of make this look like a walk in the park. Just like Macdonald revealing that Salahi was detained for yet another 6 years after his case was thrown out of court at the orders of the Obama administration leaving you astonished, your left surprised more by the frustrating emptiness of a truly significant story.