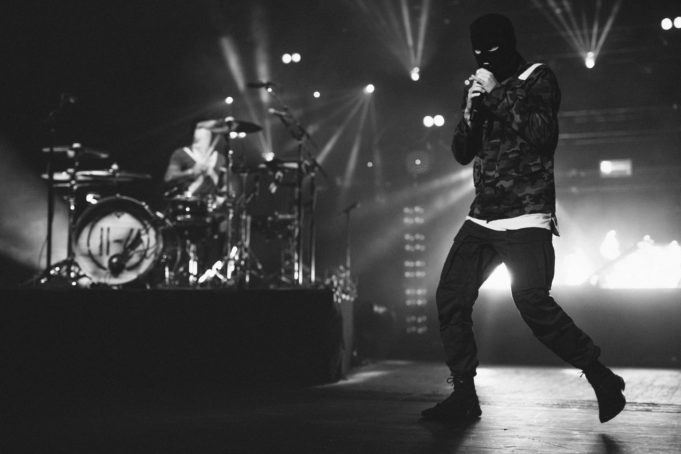 After being on a hiatus for nearly two years, the quirky Ohio duo is back better than ever.

Let’s face it unless you’re under 25, twenty-one pilots definitely haven’t been on your radar. Well known for their hugely successful album ‘Blurryface’, the duo has already sold out their 2019 ‘Bandito’ tour at Wembley Arena.

On Wednesday, the guys were back with their highly anticipated one-off show at the iconic Brixton Academy branded as ‘A Complete Diversion’. Famous for their theatrical and breathtaking live shows, they surely didn’t disappoint!

“it’s our first show in London in nearly two years, we’ve never played at this venue before”.

Die-hard fans gathered from all over the UK the night before in hopes of securing that desired front row spot. Opening not so punctual with some pretty impressive pyrotechnics, singer Tyler Joseph and drummer Josh Dun took to the stage showcasing their new album ‘Trench’.

Performing some of their most popular songs, ‘Blurryface’ and ‘Lane Boy’ from their fourth album to a packed out Brixton Academy, the crowd went wild.

“When we come back we’re gonna show you a lot things you haven’t seen before. I was thinking about what i wanted to sing and there are pages of things I wanted to talk to you about. this is everything we have right now”.

Brixton Academy is a pretty impressive venue and this isn’t the band peaking. It’s them proving that even after a long hiatus, they can handle every single bit of expectation that comes their way. There were no gentle introductions, just straight to it. This is what they do. That Twenty One Pilots show was definitely one for the books