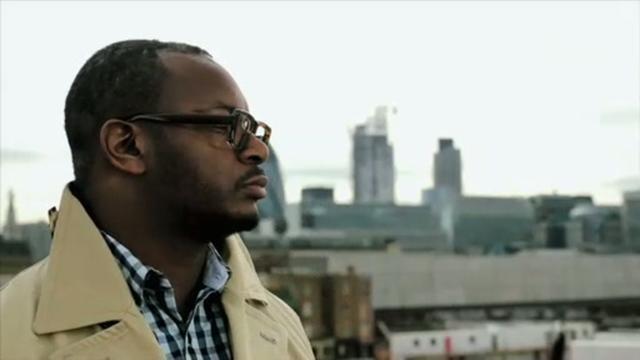 The interesting thing about getting ready to interview an artist when they’re in the midst of shooting a music video is that it’s almost never going to be at the designated time but then also, somehow, you find yourself as a dance extra in it when all you came to do was be a journalist! The thing about UK Hip Hop legend, TY, is that he wants everyone to really experience his music first-hand—literally, in my case! But one listen to the entire album, and in my humble opinion, it’s banger-after-banger solid from start to finish! Like Q-Tip did with The Renaissance, it’s without question Ty has answered for UK Hip Hop heads with Special Kind of Fool.

Tell us about this video shoot.
I met the director, Obi Mgbado, at a film premiere and was introduced to him. Obi was actually my second choice; I wanted Mo [Ali] to do it—he did a film with Bashy called Shank—but, you know, Mo really wasn’t really yielding in regards to what I needed with the bar he set in how much he needed to do the video. Obi, for me, just shone through with regards to enthusiasm and attention to detail, so that’s how we got about doing that. As far as actually doing the video, it was for my lead single Emotions. I definitely wanted people dancing, and because I come from a background of Hip Hop heads that dance, that DJ, break dance…I wanted that to come in but I didn’t want to be stereotypical. This is the energy I wanted in the video.

Albums are like time capsules, capturing an artist’s style and mindset at a particular moment in their career. Like a book, how would you describe Ty in each chapter of your, currently, four-album story?
In the first album, Awkward, I was coming from a period where I’ve been part of the Hip Hop scene in the UK for so long, but there was a dark period where after certain people signed, there was nothing happening on the commercial side. In that period of time I was touring, generally doing a lot of shows—hence poetry nights, Hip Hop nights. Rather than just go straight to making records, I kinda went straight into doing live shows. Being an energetic and individual character was allowed to happen because I wasn’t focusing on a deal, or putting records out and being seen as an artist or anything. When Awkward happened, it was like me awkwardly stepping on to the world stage and like, “I don’t know if you’re gonna feel it, but let’s see what happens.”

Upwards
Ty: When all that happened and we got such a good response from the first album, I went to the second album—Upwards—like, “the gloves are off…alright bitches, here we go—bang!” So with this album, where before I was working with many different producers, the second album was like, “you know what, lemme just do it my way!” So me and Drew [Horley]…I kinda felt like his process was naturally closest to mine; the discipline was there and we were cool as people, so when it came to doing Upwards, I wanted to say “let me show you guys Ty”. I wasn’t able to do it on my first record.

Ty: With Closer, that last two albums had me travelling all over the world, and I started to realize that I had people who liked my music all over the world, so I thought the label would really step up the American side of things. I started to call in these American collaborations. Bahamadia reached out, De La Soul—my fam for all time, Speech—we became family and I really respect that man…Upwards was kind of the moment where I took it to a world stage. After that point, though, was when I realized my former label couldn’t spend money and do certain things they wanted to do. Also, I had some health issues [with diabetes] that I had to deal with and also just took time out. I sacrificed so much in the past ten years.

AS: And your latest album…

For Special Kind of Fool, part of my aim with this new album is a kind of renaissance, a resurgence; no point moaning about what was lost, just reset the situation and lead by example. Also, what’s happened in the past is people assumed that Drew produces the music and they don’t give me any credit, but this time round I’m slappin’ the fact on the table! (laughs) Doing this album took longer because 1) my mind was in and out, and 2) I try to make quality records and not just for the sake of it. It just seemed to be the perfect time to really come back on this level of Hip Hop for the UK or even the world.

The first single EMOTIONS, featuring Sarina Leah and Shaun Escoffery, is available online and in stores now. Special Kind of Fool (the album and the instrumentals album) is also out now.