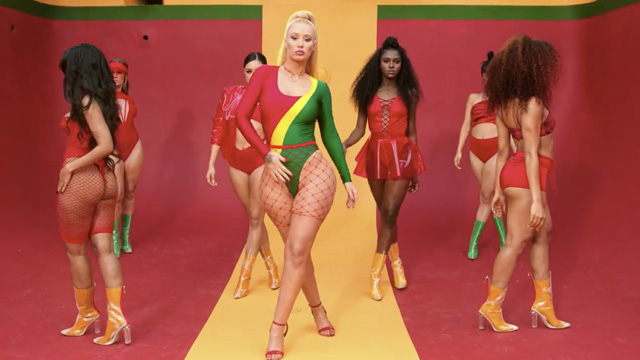 After weeks and weeks of teasers on snapchat and instagram, we can finally share with you the leaked video of Iggy Azalea – Switch ft. Anitta.

The video has been leaked online, so you are the first people to watch it, right here on Flavourmag. Its features iced crocodile sculptures, wild cats, lots of colour and her lots of booty. At one point Iggy Azalea looks almost nude in a bikini that looks like its made of a few pieces of string, until you look at it closely, you’ll then realise is a nude skin colour swimsuit that hides all her private parts. I wanted to make a song that could be fun to dance to, but the lyrics when you really listen to them are very powerful,. With its soft flow, high colour, bootylicious girls and booty shaking, this video is a delightful treat from the Iggy Azalea camp. Let’s see if it does better than Iggy Azalea’s previous release ‘Mo Bounce’.