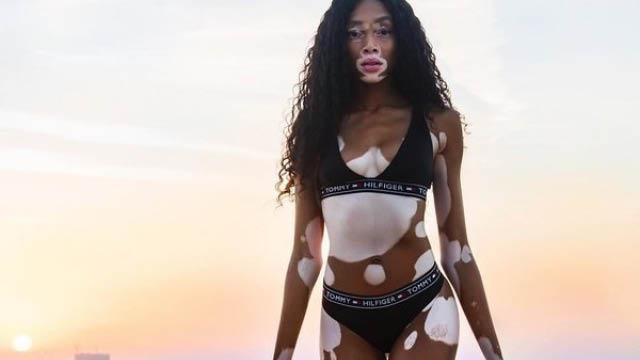 Winnie Harlow sent a scathing message on Instagram to the Evening Standard and all other tabloids, magazines stating, I’m not a “Vitiligo Sufferer”.

The Canadian supermodel then went on to say,

I’m not a “Vitiligo model”. I am Winnie. I am a model. And I happen to have Vitiligo. Stop putting these titles on me or anyone else. I AM NOT SUFFERING! If anything I’m SUCCEEDING at showing people that their differences don’t make them WHO they are!

Posting on her Instagram, Winnie Harlow rocks a Tommy Hilfiger black bikini on a beach in Dubai, taken from a new story on the evening standard…

“The beach was damn fine that day, nothing to suffer about!” Damn straight Winnie. We totally agree with you. So we thought we would make a short list of some of Winnie’s so-called suffering moments…

The list continue’s, and judging from the above list, Winnie is anything BUT suffering. Plus, (she doesn’t know this yet), but I am personally in a mile long queue of men that would love to date Winnie Harlow lol.

Here are a few more Instagram posts during her trip to Dubai where the media claim she is suffering.

Is Winnie Harlow a Sufferer or a Succeeder? Leave your comments below